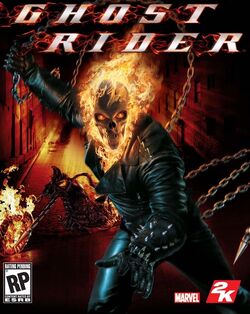 The game features a system reminiscent to that of God of War, even having some of the same controls and style of attacks. Combos are done with bare hands and with the Demonic chain. The overall mood, setting and visual style are very much the same as those in the first installment of Devil May Cry. When on the Hellcycle, Ghost Rider is still capable of performing many of the same chain attacks, and can shoot hellfire.

The Game Boy Advance version has some elements of Road Rash and Castlevania.

After beating the game on certain difficulty levels, bonus character skins can be unlocked. They include Classic Ghost Rider, Ghost Rider 2099, Vengeance, and Blade the vampire hunter.

When playing as Blade, they get slightly changed gameplay. Blade only has his Daywalker Sword for a weapon, he does not have the shotgun or chain-link attacks of Ghost Rider. Combo attacks are much more limited. He also does not replenish health by absorbing flames from the occasional fire-drums staggered throughout the game levels. Instead, Blade can suck the life force from any wounded foe that is a non-boss (readiness is indicated by a circle above their heads). However, during the motorcycle-racing sections, his vehicle can still shoot firebolts, and he can use his sword for melee combat.

The tormented superhero/anti-hero Johnny Blaze, once a heroic daredevil cycle rider before making a deal with the Devil for his soul in exchange for the life of his father.

Like this? Let us know!
Retrieved from "https://marvel.fandom.com/wiki/Ghost_Rider_(video_game)?oldid=5670464"
Community content is available under CC-BY-SA unless otherwise noted.