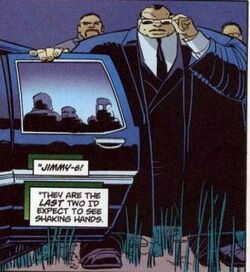 When the Kingpin lost control of New York's underworld, crimelord Don Fortunato filled the power void, but his son, Giacomo "Jimmy-6" Fortunato, disapproved of his family's methods and tried to quit organized crime just as his father's plans were coming to fruition. Enraged, Don Fortunato demanded his son's death. On the run, Jimmy-6 pushes Ben Reilly (a clone of Peter Parker) away from a barrage of bullets intended for him. Later, Reilly returned the favor by rescuing Jimmy-6 from an assassination attempt. Although the wounded Jimmy-6 wanted nothing to do with Spider-Man, he reluctantly accepted Reilly's offer to hide out at his apartment.[citation needed]

Hoping that Jimmy-6 could still be persuaded to return, Don Fortunato ordered that he be captured rather than killed. Shortly after meeting Reilly's "cousin" Peter Parker, Jimmy-6 learned of an alliance of rival crimelords formed by gangster Hammerhead which planned to assassinate Don Fortunato. Jimmy wanted to warn his father of the planned hit, but later learned that Don Fortunato formed an alliance with the Hydra terrorist organization to defeat his rivals. [citation needed]

In a small ceremony, Fortunato revealed he has kidnapped civilians from each of the territories of the attending crime-lords. Jimmy-6 learned that the civilians were to be executed as an example of what would happen in case of disobedience. Horrified, Jimmy pulled a gun on his own father, who disowned Jimmy immediately. Spider-Man and Daredevil helped rescue the civilians but needed help themselves when they were cornered near an exit. Jimmy-6 flew in on an attack helicopter, killed the men threatening the group and carryied the heroes and civilians away to safety.[citation needed]

Wounded by enemies of his father in Forest Hills, Queens, Jimmy-6 sought refuge at the nearby Parker residence, where he stopped an assassin sent by the Green Goblin. When Spider-Man was suspected of murdering street thug Joey Z, Jimmy-6 saved him from vigilantes trying to collect the $5 million bounty placed on Spider-Man's head. Soon after, Jimmy-6 shot a new Green Goblin (a genetic creation employed by Osborn), although the Goblin's armor saved him. Several vigilantes sought the bounty on Jimmy's head afterward, but the Punisher and government mercenary Shotgun (J.R. Walker) saved him.[citation needed]

When the Kingpin returned to claim his criminal empire, Jimmy-6 challenged him and rejoined the Fortunato crime cartel, replacing his incapacitated father (allegedly hospitalized by Kingpin). To try and stop the bloodshed, Jimmy-6 reached an agreement with the Kingpin. Peter Parker is caught photographing a secret meeting between Jimmy and the Kingpin, but Jimmy let Parker go due to his 'relation' to Ben Reilly. After one of Jimmy's men accidentally knocks over the Kingpin's high-stakes poker game, New York erupts in a gang war between rival underworld faction. When Jimmy and his family were caught in a crossfire involving Kingpin's Enforcers (Fancy Dan, Montana & Ox), Spider-Man's intervention enables Jimmy to escape, and he later helps Jimmy defeat the Enforcers in Jimmy's penthouse.[citation needed]

Jimmy-6's current status is unknown now that Don Fortunato has regained his health and control of the cartel, but it was confirmed that Jimmy-6 had somehow made peace with his Father, as Fortunato briefly refers to him as "My Beautiful Giacomo". With Angelo dead after he attempted to become the second Venom, Jimmy-6 is in all probability the sole heir to Fortunato's crime empire.[citation needed]

Composed almost entirely of muscle, Jimmy-6's massive frame grants him peak human strength and resistance to many penetration wounds. He is a skilled strategist and electrical engineer, having designed the Fortunato estate's security systems. A veteran of two tours of duty with the U.S. Army, he is an accomplished hand-to-hand combatant, firearms user and helicopter pilot.

Like this? Let us know!
Retrieved from "https://marvel.fandom.com/wiki/Giacomo_Fortunato_(Earth-616)?oldid=6030655"
Community content is available under CC-BY-SA unless otherwise noted.