It has been suggested that this article or section be merged with Henry Pym (Earth-616)#Equipment. (Discuss)
Giant-Man's Suit 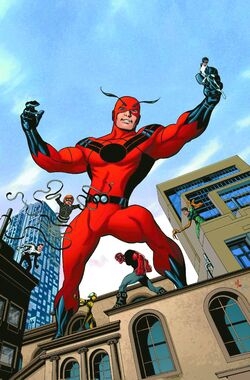 Overtime Hank Pym was able to alter the Pym Particles to allow him to grow in size and became Giant-Man and later Goliath. His suit was much the same as Ant-Man's Suit but did not include the helmet due to the fact that communication with insects when he had grown in size was impossible. Instead he wore a mask with cybernetic technology.[1]

Other individuals such as Clint Barton[2], Bill Foster[3], and Tom Foster[4] have also used the suit to become "Giant-Sized."

During an attack by Ultron, Hank Pym seemingly perished. He left one of his labs to Scott Lang, who recalled their encounter with Raz Malhotra and sent him the Giant-Man's Suit as a present.[5]

Like this? Let us know!
Retrieved from "https://marvel.fandom.com/wiki/Giant-Man%27s_Suit?oldid=6448482"
Community content is available under CC-BY-SA unless otherwise noted.