In Winzeldorf, Germany, an angry mob rages through the streets in search of a monster: the mutant Kurt Wagner. Kurt pleads that he only wants to be left alone, but the hysterical mob attack and overwhelm him through sheer numbers. Suddenly, the whole mob literally freezes in their tracks, subdued by Professor Charles Xavier’s telepathy. Xavier offers Kurt refuge at his school, which is a haven for mutants. Kurt asks if the Professor can make him normal, but he responds by asking if, after that night, he truly wants to be normal (i.e., like his persecutors). Kurt accepts the Professor’s invitation.

Quebec, Canada: Professor X visits a government base and meets Major Chasen and the mutant referred to as Weapon X, but better known as Wolverine. Charles offers Wolverine a chance to join him and become a free agent, an offer Wolverine accepts on the spot. Chasen objects but Wolverine officially resigns from duty by slicing off his tie. As Wolverine leaves, Chasen warns him this isn’t over.

Nashville, Tennessee: Banshee is attending a show at the Grand Ole Opry when he receives a telepathic message from the Professor with an urgent plea for help. He quickly agrees to do what he can.

Kenya, Africa: A woman named Ororo is being worshipped by local tribesmen as a rain/fertility goddess. Xavier approaches her with an offer he hopes she will not refuse. After listening to his request, she accepts.

Osaka, Japan: Xavier pays a visit to Sunfire, pitching him a similar offer. Sunfire is disinterested in helping white westerners, but reasons that he owes it to himself to test his abilities.

On a commune in Siberia, Farmer Piotr Rasputin is harvesting crops when a fellow farmhand notices a neighbor's tractor has gone out of control and is heading straight for Piotr’s young sister Illyana. As Piotr runs towards her, he transforms into a giant metal being. The tractor collides with him but is destroyed by the impact with Piotr’s metallic body. Xavier invites him to come to America to his school. Upon asking his parents’ permission, he accepts Xavier's offer.

Arizona: An Apache Indian, John Proudstar, chases a bison on the plain, easily chasing it down and tackling it. Xavier offers him acceptance into his school. Proudstar refuses to help a white man at first, but Professor X counters that perhaps he is just a coward. Infuriated, Proudstar accepts Xavier's offer in order to prove him wrong.

Chapter 2: And When There Was One

The seven disparate mutants meet at Xavier’s school in Westchester and are given new costumes composed of unstable molecules. A narrative caption relates that Professor X gave each of the international students instant fluency in English, via telepathy. Proudstar questions why Xavier has brought them together. Xavier introduces them to Cyclops, who makes a dramatic entrance sporting a new visor and slightly redesigned costume. He informs them that this new team of X-Men has been assembled to find and rescue the missing original team.

Cyclops shows them Cerebro, the mutant-detecting supercomputer which Xavier used to find them. A flashback depicts that just recently, Cerebro had alerted Professor X and the original team (Cyclops, Marvel Girl, Angel, Iceman, Havok, and Lorna Dane) to the existence of an extremely powerful mutant on the remote Pacific island of Krakoa. The team headed off to find this mutant (there is a passing mention to the Beast having departed from the team). Immediately upon their arrival, they were ambushed. Later, an amnesiac Cyclops awoke alone on the X-Men’s stratojet, which was already in flight on cruise control. His visor was missing but his eyes were inexplicably no longer emitting optic blasts. Upon returning to Xavier’s school, though, his optic blast began firing once again but with more power than ever; so much more power in fact that Professor X had to build a new visor for Cyclops to control them.

Sunfire initially refuses to participate on the rescue mission and flies off in a huff. The rest of the new members agree, however, and depart in the stratojet. In midair, though, the group see Sunfire flying alongside their plane. He boards it and tells Cyclops he’s changed his mind and will participate in the mission.

As the Stratojet approaches Krakoa Isle, Cyclops directs the team to split up into pairs: Storm (Ororo) and Colossus (Piotr), Banshee and Wolverine, Sunfire and Nightcrawler (Kurt), and lastly Thunderbird (Proudstar) and Cyclops. There are minor disagreements and bickering among the new members, who are still just a pack of strangers to each other.

Cyclops and Thunderbird land the Stratojet and begin their search. They have barely begun exploring the island before the Stratojet vanishes inexplicably. Upon seeing a temple in the distance, they head towards it. En route, they are attacked by creeper vines but take care of them quickly.

Along the shore, Wolverine and Banshee are attacked by giant crabs. Elsewhere, Colossus and Storm trek toward the temple and are nearly struck by an avalanche. As they run for cover, the rocks follow them and Colossus uses a tree as a makeshift bat to swat them away. Finally, Nightcrawler and Sunfire battle a group of angry birds. Nightcrawler teleports around the attacking birds while Sunfire just blasts them. Each pair of heroes has spotted the temple and they all convene outside of it.

They enter the temple, busting through a pair of tightly-sealed doors. Inside, they find the missing X-Men. Weird tendrils bind the captives and appear to feed off them. The new team quickly gets their predecessors to (relative) safety outside. The Angel scolds Cyclops for returning. He explains that this was all just a trap. The ground shakes, the temple rises out of the ground, and the entire island moves. The X-Men had come to Krakoa to find a mutant, but that mutant is the island itself!

In a flashback, it is revealed that radiation from atomic tests near the island caused a host of mutations on the island’s indigenous life before the island itself eventually mutated into a single group-mind entity. Krakoa needs to feed off the life energies of other mutants and found the X-Men to be an excellent source of sustenance. It allowed Cyclops to escape in order to bring back more mutants, which he did.

Krakoa launches an all-out assault on the combined teams. Despite the combined power of old X-Men and new, none of their attacks seem to affect the island. Professor X then intervenes via a telepathic message and tells Cyclops he thinks he knows of its sole weakness.

As Professor X attacks the island with his mind to distract its communal intellect, Storm flies into the sky and shoots electricity down into Lorna Dane, stimulating her magnetic powers. Fearing that the tactic may kill Lorna, Havok pleads with Cyclops to put a stop to it. But Cyclops tells his brother that he cannot risk the life of one woman, even the woman Alex loves, for the safety of the entire world. Suffering from fatigue, Professor X's assault falters and Krakoa regains its strength from the typhoon that Storm has created.

Scott and Alex combine their powers with Lorna's own and she directs it downward. Her magnetic power penetrates to the center of the Earth, causing Krakoa to cry out in terror. As everyone flees to safety, Iceman snatches up an unconscious Lorna, refusing to allow Havok to help her. This angers Havok, but Cyclops tells him to set aside their personal feud until later. As the island begins breaking up, everyone jumps onto Iceman's ice raft. Lorna has disrupted the magnetic energy in the vicinity of the island's location, effectively canceling out gravity. Krakoa is flung out into the vacuum of space. The ocean at its (now former) location churns into a swirling whirlpool.

Iceman covers his raft in an ice-bubble just before it is sucked into the whirlpool. Eventually, it breaks the (once again calm) ocean surface and the team emerges to find the Stratajet afloat nearby. After boarding the ship and flying off, slight disagreements that occurred between the new members are (almost) sorted out. Angel then ponders aloud to the assembled group what they will do with thirteen X-Men.

Forty-five years ago, a comic book came out that would change the face of Marvel Comics forever. Writer Len Wein and artist Dave Cockrum revamped the X-Men completely, replacing the bulk of the teen heroes with a completely new international cast! The legendary one-shot took comic fans by storm and set the series off in a new direction, setting the stage for the legendary X-scribe Chris Claremont to make them the most popular heroes in the Marvel Universe! Now, 37 of Marvel's top artists come together to re-create this epic story, each re-drawing one pulse-pounding page in tribute to this Marvel masterpiece! 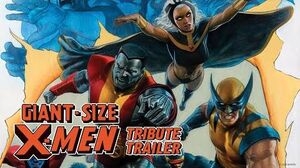 Retrieved from "https://marvel.fandom.com/wiki/Giant-Size_X-Men:_Tribute_to_Wein_%26_Cockrum_Vol_1_1?oldid=5733930"
Community content is available under CC-BY-SA unless otherwise noted.