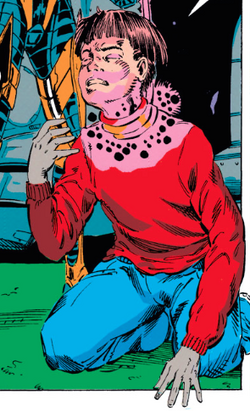 Young Gilbert Benson was a mutant with the ability to absorb different energy frequencies and store them within his body. His mother Erika Benson, the armored mutant mercenary known as Harness who had been employed by Advanced Idea Mechanics, cruelly exploited this ability and forced Gilbert, whom she dubbed Piecemeal, to travel across the world with her to absorb the dispersed energy of Proteus, the deceased reality-warping son of geneticist Moira MacTaggert.[1]

Absorbing the energy, Piecemeal grew larger and larger until he looked like a 700-pound monstrosity.[2] The mutant team X-Force, alongside the New Warriors, and a makeshift group of Muir Island-based X-Men allies, did their best to help siphon off the energy, but they failed. Finally, Gilbert's body exploded, and in that instant his mind combined with that of the reformed Proteus to form a new amalgamated being. The new entity set about warping reality all over Scotland.[3]

The amalgamated Proteus/Piecemeal also captured their mothers and held them hostage as the pre-government-sponsored X-Factor team arrived. Finally, X-Factor convinced the boys to disperse their energies, consigning them both to oblivion.[4]

Benson could track and absorb energy fields, and alter his mutant cells to store and metabolize specific energy signatures.

Like this? Let us know!
Retrieved from "https://marvel.fandom.com/wiki/Gilbert_Benson_(Earth-616)?oldid=6006801"
Community content is available under CC-BY-SA unless otherwise noted.