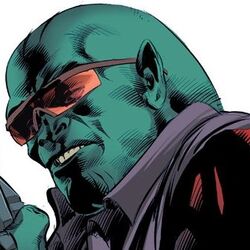 Giogo was a competitor of Yotat's boss, Jugando.

One night at Mafuni's, Yotat overheard two Brood half-breeds claiming that they had allegedly killed The Collector and stolen his weapons collection.

Yotat used the information to uncover the weapons cache, and then attempted to trade them to Giogo, in exchange for membership in his organization.

Giogo had other ideas; however, shooting Yotat and leaving him for dead as he blew up the weapons depot with Yotat inside it.

Somehow Yotat survived and was transformed by the explosion, then after the Multiverse was destroyed by Incursions and recreated in the form of Battleworld, Yotat caught up to Giogo at Cebulski's Bar on Knowhere, killing the man who had betrayed him.[1]

Seemingly those of a typical Skrull.

Like this? Let us know!
Retrieved from "https://marvel.fandom.com/wiki/Giogo_(Earth-616)?oldid=5670177"
Community content is available under CC-BY-SA unless otherwise noted.