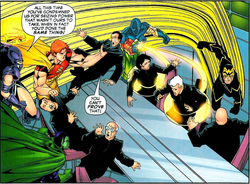 After the Squadron Supreme were shunted from their universe following their battle against the Nth Man[1], the people of Earth had grown weary of the constant natural, political, and social upheavals that had plagued the world in recent years, largely because of the presence of the Squadron. So, they elected leaders into a "Global Directorate" with far-reaching and invasive political powers. The Directorate used the devices of the Utopia Program for themselves, creating a totalitarian government. They formed a secret police called the Blue Eagles and enslaved the genius Emil Burbank so they could use his intellect to serve their agenda.[2]

The Squadron Supreme eventually returned to their universe and discovered how much their world has changed since they have been gone. The team reorganized and vowed to fight the Global Directorate.[2] With help from the Exiles, the Squadron confronted the Directorate and revealed that they were guilty of corruption by rigging votes in their favor. After removing the Directorate, Hyperion declared that there would be another democratic vote for who would be in power, but this time, it would be fair.[3]

Retrieved from "https://marvel.fandom.com/wiki/Global_Directorate_(Earth-712)?oldid=5547201"
Community content is available under CC-BY-SA unless otherwise noted.