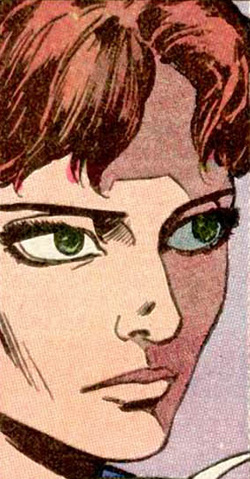 Glorianna was a somewhat romantic interest of Matt Murdock and was usually his damsel in distress, who he had to rescue on a number of occasions. She was imperiled more than once by the assassin known as the Gael. In her first appearance she was kidnapped by the Gael, who tied her to a chair and gagged her. Daredevil eventually rescued her and was quite protective of this young lady for some time.[citation needed]

Glorianna claims to have loved Murdock. However, she broke off contact with him after his repeated absences. [1] The relationship cooled further when Murdock's old love Karen Page returned to New York City. Glorianna had her apartment ransacked, and she soon moved in and began a romance with Murdock's best friend Foggy Nelson.[citation needed]

She was later killed by Victor Krueller.[citation needed]

The Krueller saga (Daredevil Vol 1 338-Daredevil Vol 1 342, the only Marvel comics written by "Alan Smithee" which is a traditional pseudonym for authors) presents an important timeline inconsistency affecting Karen and other characters. In that story, Krueller had been attacked by a young Kingpin, who was not yet the ruler of crime, and several people witnessed the event including Foggy Nelson, a law student; Karen Page, a struggling actress; and Glorianna O'Breen, who had just migrated to the US. However: Karen started pursuing a career as an actress in Daredevil Vol 1 65 (1970). She had been working for Foggy Nelson's firm since Daredevil Vol 1 1 (1964), where Foggy was already a lawyer - so at no moment Foggy was a law student and Karen a struggling actress at the same time. Besides, Glorianna O'Breen went to the US in Daredevil Vol 1 205 (1984); by then Kingpin was already a very established mob boss (not an up-and-comer) who had clashed with Daredevil since Daredevil Vol 1 170 (1981) - and had been seen as a lord of crime since Amazing Spider-Man Vol 1 50 (1967).

Like this? Let us know!
Retrieved from "https://marvel.fandom.com/wiki/Glorianna_O%27Breen_(Earth-616)?oldid=5432523"
Community content is available under CC-BY-SA unless otherwise noted.