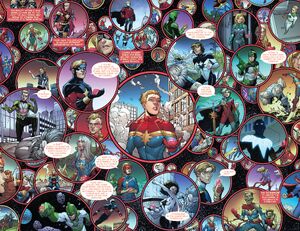 An alternate reality (also known as a parallel reality) is a reality that co-exists separately from another within the Multiverse (a collection of realities). Generally speaking, alternate realities contain variants of the dimensions that make up any given reality. Normally, each reality contains an Earthspace, an Asgard, a Negative Zone, and so on.[1] Because the Earth (and thus the universe it inhabits) is arbitrarily regarded as the nucleus of the reality it belongs to, the term "Earth," "universe" and "dimension" are normally used as synonyms for "reality." The same applies to the terms "alternate Earth," "alternate universe" and "alternate dimension" with regards to alternate realities.

Within the context of Marvel, the term "alternate reality" is used to refer to another fictional reality that isn't the one in which most of Marvel's stories take place, this reality in particular being Earth-616, where the Prime Marvel Universe exists. Realities are formally assigned a numeric designation for better categorization and identification. The Prime Marvel Universe is also known as Earth-616, the Ultimate Universe is Earth-1610, the Marvel Cinematic Universe is Earth-199999, and so on. For a list of realities, click here. While these designations use the prefix "Earth-" instead of "Reality-," it should be noted that "Earth-811" makes reference to the reality itself and not just the planet Earth of this reality.

As mentioned above, alternate realities usually share many elements between each other, but they stand out by how they differentiate from each other. Alternate realities can be different from each other in many ways and to different degrees. If two realities share the same backstory but one of them diverges from the other at a specific event, this reality is better known as a divergent/alternate timeline. For example, in the Prime Marvel Universe, Spider-Man failed to save Gwen Stacy from dying at the hands of the Green Goblin. In the divergent reality of Earth-7736 he succeeded at rescuing her.