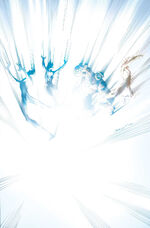 The Big Bang is the name given to the event that triggered the existence of the universe's seventh incarnation.

According to the Silver Surfer, the Big Bang occurred when the single, perfect object where all potential matter and energy was contained, the Alpha/Omega, collided with the Incubator which contained the sole being of the universe's sixth incarnation, the creature that would become Galactus.[1]

According to Knull, who was present in the Abyss that existed before the Big Bang, it was sparked by the Celestials.[2]

Retrieved from "https://marvel.fandom.com/wiki/Glossary:Big_Bang?oldid=5822046"
Community content is available under CC-BY-SA unless otherwise noted.