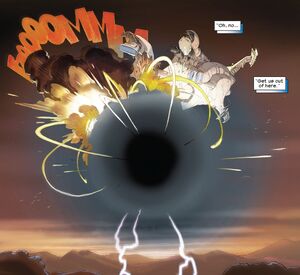 A Black Hole is a region of spacetime exhibiting such strong gravitational effects that nothing not even particles and electromagnetic radiation such as light can escape from inside it. The theory of general relativity predicts that a sufficiently compact mass can deform spacetime to form a black hole.

Retrieved from "https://marvel.fandom.com/wiki/Glossary:Black_Hole?oldid=6133894"
Community content is available under CC-BY-SA unless otherwise noted.