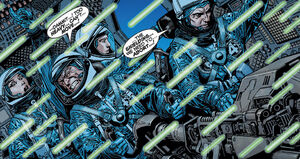 Cosmic radiation was responsible for the creation of the Fantastic Four on Reed Richards' fateful space flight. Lack of sufficient shielding caused Reed Richards, Sue Storm, Johnny Storm, and Ben Grimm to receive exposure to cosmic rays in space. This led to lifelong mutagenic changes in the four.[1]

Although Reed and the others believed that he had miscalculated the amount of necessary shielding, years later they learned that he had not.[2] The storm was an attempt by the alien Entity to communicate,[3] and the powerful denizen of the planet Spyre known as Revos directed the storm at Reed's spacecraft to prevent the flight from detecting and visiting Revos' planet. After realizing that the crewmates of the spacecraft survived their encounter with the cosmic rays and were granted powers, Revos took some of the radiation and tried to mutate a group of his own planet's citizens to grant them superpowers, just in case Reed and his crew ever tried to use their abilities to still come and attack the planet of Spyre.[2]

The manipulation of cosmic rays has frequently been a part of Reed Richards's attempts to restore Ben Grimm to his human state.[citation needed] Reed himself used a cosmic radiation storm to recharge his own powers at a point when he had lost his elasticity.[4] Another storm was responsible for further mutating Ben Grimm for a time, along with his partner Ms. Marvel.[5]

The cosmic radiation that transformed the Fantastic Four is usually deadly to humans. It would have killed Jean Grey when she interacted with it, had not the cosmic entity known as the Phoenix Force intervened.[6]

Other individuals have occasionally tried to recreate the cosmic ray event in order to gain powers for themselves, with varying success. The Red Ghost and his Super-Apes as well as the U-Foes all succeeded in becoming cosmically empowered after the Fantastic Four.[7][8]

Cosmic rays were employed by MODOK and the Leader to create a combined gamma-cosmic process, empowering General "Thunderbolt" Ross and Betty Ross to become the Red Hulk and Red She-Hulk.[9]

Cosmic rays have been shown to cancel out gamma energy. The U-Foes calls it "anti-gamma" and "pure poison" to a gamma mutate like the Hulk.[10] Jackie McGee calls cosmic radiation the "opposite" of gamma.[11]