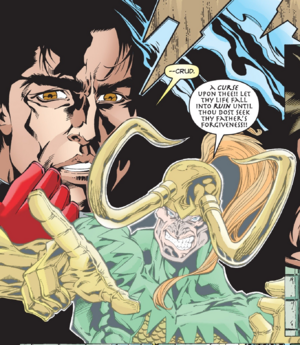 A curse, also known as a Jinx or a Hex is a magical spell placed on a person or an object. This is the opposite of a blessing it is mostly used to punish those who have wronged another. The curse can vary from the horrific and tragic to the comical or ironic. To lift the curse the inflicted will either have to right the wrong or convince the bestowed to release the torment.

Deadpool was cursed for a short time by Loki, who had claimed to be his father. The curse made him look like the actor; Tom Cruise, rendered his face totally invulnerable, and caused his life to "fall to ruin." The curse was removed when Deadpool reconciled with his true father, who he met in a bar without ever realizing who it was.[1]

Deadpool has established a relationship with the personification of Death and as a result has been cursed by Thanos, to be unable to die.[2]

The Wendigo is the result of an ancient curse laid down by Elder Gods[citation needed] of Canadian folklore that transforms any person who eats the flesh of another human being in the Canadian wilderness into a massive, fur-covered humanoid beast with fangs and razor sharp claws.[3] Recently, it has been revealed that a person can inherit the curse of the Wendigo if he or she is bitten by the beast and survives.[citation needed]

The Defenders, Doctor Strange, Namor, Silver Surfer, and the Incredible Hulk were cursed by Gaea to always unite whenever there was a threat to the Earth. They solved that problem by taking over the Earth and waiting until the curse was lifted.