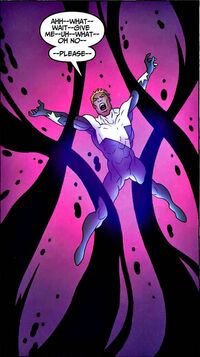 Darkforce is the name given to a negative energy that is the counterpart to the Lightforce, drawn from a dimension nicknamed the "Darkforce dimension". Some mutants can tap into this energy naturally, while normal humans may learn to call it up magically or even technologically such as Smuggler. Like other negative energies, Darkforce is easy to learn but hard to control. Darkforce can have a bewildering variety of effects, and its users can control differing aspects of it, so some time passed before it became apparent that all these phenomena had a single source.[1]

The Darkforce dimension has no formal name, few known inhabitants, and no known points of reference. Its most obvious (and perhaps only) characteristic is darkness: not simply an empty place that has no light but a medium that absorbs light. This "dark matter" may only be what humans can perceive of an alien universe. Normal light sources are practically useless, and magical sources have limited range and power. The same absorption applies to heat and even life essence. Those who enter the Darkforce dimension without protection feel coldness and, in time, lethargy. Prolonged exposure to Darkforce in our dimension can have the same effects.[2]

Those who can access Darkforce typically summon the dark matter of the Darkforce dimension. It appears in this dimension as darkness, but with varying consistencies. A weak field of Darkforce looks like a dark mist or shadow and can become camouflage, intimidation, or a smokescreen.[3] A medium field behaves like a thick liquid and can impede or encase an opponent.[4] A strong field, for most purposes, acts like a solid that can form shapes or carry things.[5]

A disturbance in the Darkforce dimension at one point changed its properties relative to our dimension. Generally, this change has increased the powers of Darkforce users.[8]