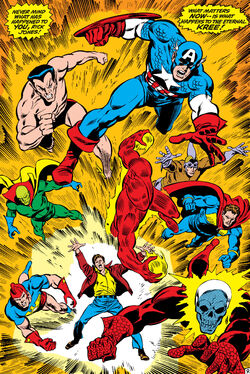 The Destiny Force is the name of a mysterious and near-limitless energy source that is said to be inherent in all humanity. It is said to be a powerful energy that is not consciously accessed by human beings and often requires outside activation such as with the cases of Leonard Tippit[1] and Rick Jones.[2]

The Destiny Force has been shown to allow users to access a myriad of abilities such as teleportation of matter, potent energy blasts, molecular disruption, time manipulation, mind control on a massive scale, size alteration, molecular reconstruction, augmentation of physical attributes, and self-healing. The human that has shown the most versatility with this power is Rick Jones and his descendants.[3]

The children of the Future Foundation surmised that certain individuals touched by different metaphysical abstracts unconsciously tap into it to fuel their own capabilities. People like Gamma Mutates, Cosmic Radiates, Ionic Enhanciles, Super-Soldier Serum takers, Annihilus's Cosmic Control Rod, Janus's negative Pym Particle enhanced physiology and the positive iteration users pertaining to Ant and Giant Man casts. Each and every differing empowerment process feeding back into the same source through a multi-axis graph detailing their originator.[4]

Alluded to by Uatu the Watcher and ruminated upon by Scott Lang. But yet to've been contemplated upon to understand the source of which powers originate until Onome and Bentley put it all together.[5]

The current owners of the Destiny Force are Rick Jones, Leonard Tippit, Jonz Rickard, and Thanatos.