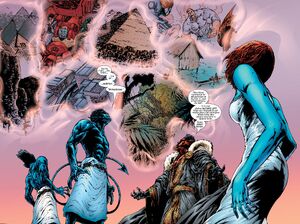 A dimension is a portion of reality containing space, time, matter, and energy,[1] and is separated from other dimensions by some physical difference in these elements.[2] A dimension may be a universe, which contains a virtually infinite amount of space, or a pocket dimension, which is clearly finite and often relatively small.[3] The term "realm" is used often to refer to dimensions,[4] mostly of the second variety.[1]

A full list of Dimensions can be found here.