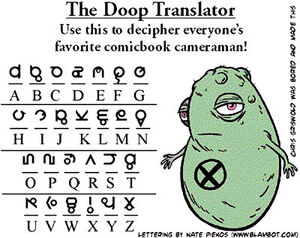 Doop speaks his own language known as "DoopSpeak". The speech bubble appears to have nonsensical text.[1] However it was revealed to be a Cypher Language. The actual lettering is based on the "Roswell Wreckage" Font which was created by Blambot, a company that specialists in Comic Fonts and lettering. In some cases certain letters have not been able to be translated as they do not correspond to our human alphabet, so in those cases our translation will display a "?" for each unidentifiable letter.

Retrieved from "https://marvel.fandom.com/wiki/Glossary:Doop%27s_language?oldid=5735220"
Community content is available under CC-BY-SA unless otherwise noted.