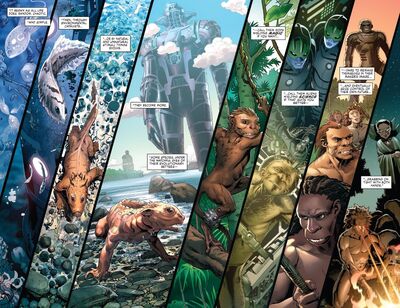 Evolution is change in the heritable characteristics of biological populations over successive generations. These characteristics are the expressions of genes that are passed on from parent to offspring during reproduction. Different characteristics tend to exist within any given population as a result of mutations, genetic recombination and other sources of genetic variation.

The evolutionary process occurs when life is effected by catalysts in its environment or by natural stimuli and unnatural stimuli, resulting in certain characteristics becoming more common or rare within a population. [1] Advanced alien beings such as the Celestials and the Kree have interfered with the natural evolution of Earth.[1]

The scientific theory of evolution by natural selection was proposed by British scientist Charles Darwin in the 19th century and was set out in detail in his book Origin of Species.[2]