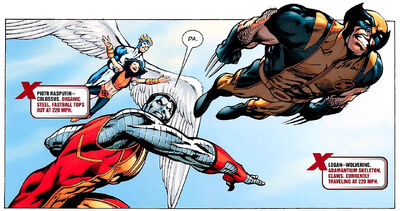 The fastball special is probably the most famous tag-team move in superhero fiction where a super-strong hero literally throws a willing partner toward a target. The maneuver first appeared in X-Men #100, when Wolverine had Colossus hurl him in a battle. It quickly became a favorite tactic of the two heroes. It has since been used by many superheroes, some from companies other than Marvel.[citation needed]

When executing the fastball special, Colossus—a large and very strong mutant—takes the much smaller Wolverine into his hands and hurls him forward, like a baseball pitcher would throw a fastball. As a result, Wolverine can reach the target of an attack he may not be able to reach otherwise and do it much faster than he would if he ran there by himself. Furthermore, Wolverine's metal-laced skeleton and his healing factor means that he is typically not in major danger of being severely injured in the move.

The fastball special was also reversed once, when Wolverine took advantage of the moon's reduced gravity to throw Colossus at Phoenix.[1]

The fastball move was revisited in a scene from the comic book series Astonishing X-Men written by Joss Whedon and drawn by John Cassaday. In the story, Colossus, who was believed to be deceased at the time, had just been discovered and released from imprisonment, and one of those responsible was escaping in an aircraft. Wolverine asked Colossus if he was capable of physical effort after his long imprisonment, and when Colossus replied that he was, Wolverine said, "I have two words for you." The next frame, a full two-page spread, showed Wolverine in mid-air and Colossus far below in a "follow-through" position, obviously having just launched his teammate; no dialogue was used in this frame, the picture speaking for itself to readers familiar with the maneuver.[citation needed]

A new way of employing this move was seen in Avengers vs. X-Men #2, when Magneto used his magnetism powers to hurl Colossus at a S.H.I.E.L.D. Helicarrier, called a "magnetic fastball special".[2]

According to Wikipedia a Fifth Column or Fifth Columnist is an individual or a group of people who clandestinely undermine a larger group such as a nation from within. The term was coined by radio announcer Emilio Mola in 1936.

In the Marvel Universe it's usually a blanket term for groups that attacked America and other Allied countries during World War II, and later during the Cold War, to identify groups from Communist countries trying to undermine Democratic countries.

One of four tests of a given race that has been altered by the enigmatic Celestials. During the First Host, the Celestials select the dominant race of a given planet and alter their genetic structure for reasons that have not yet been revealed. The Celestials use their advanced technology to alter the race into three distinct races: The mainline race that shows normal attributes until evolution and an outside catalyst creates mutation, granting individuals of the mainline race a wide array of varying abilities. A superior race dubbed Eternals who are typically empowered with cosmic energy, and a genetically unstable race dubbed Deviants. The Celestials have practiced these tests on various races such as Humans, Kree and Skrulls.

On Earth-30826, it was the First Contact, performed by the Eternals (servants of the Celestials) by abducting Homo erectus to create Deviants.[1] 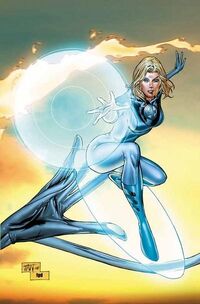 Originally a term coined by Michael Faraday to provide an intuitive paradigm, but theoretical construct (in the Kuhnian sense), for the behavior of electromagnetic fields, the term force field refers to the lines of force one object (the "source object") exerts on another object or a collection of other objects. An object might be a mass particle or an electric or magnetic charge, for example. The lines do not have to be straight, in the Euclidean geometry case, but may be curved. Faraday called these theoretical connections between objects lines of force because the objects are most directly connected to the source object along this line.

A conservative force field is a special kind of vector field that can be represented as the gradient of a potential.

Note that a force field does not exist in reality, per se, but it is really a Kuhnian construct that allows scientists to visualize the effects of objects on other objects; in other words, it makes the math easy.

In science fiction and fantasy literature, a force field or protective shield is a barrier made up of energy to protect a person, area or object from attacks or intrusions. The idea may be based partly on the concept of a vector field, though in character it resembles the "warding spells," the defensive magic claimed to be used by the Druids and shamans of the ancient world.

For a list of characters who can create force fields, see Category:Force Field 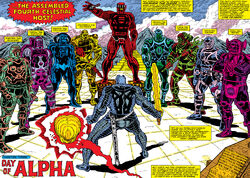 The fourth of four test of a given race that has been altered by the enigmatic Celestials wherein they pass judgement on the races that they have created. In the case of the Earth, Odin and the Eternals attempted to combat the Celestials, only to fail. The entire Asgardian race (minus Thor) and Zuras were slain. However, the goddesses of Earth convinced the Celestials of the merits of the human race by offering them the Young Gods. The Celestials left Earth satisfied, erasing humanities memories of the Celestials for some time.[1] 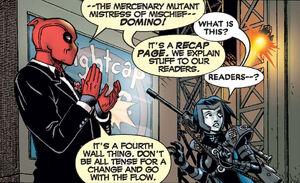 The fourth wall is the imaginary wall at the front of the stage in a proscenium theater, the term stems from the absence of a fourth wall on a three-walled set where the audience is viewing the production, through which the audience sees the action in the world of the play. The meaning of the term "fourth wall" has been adapted to refer to the boundary between the fiction and the audience. "Fourth wall" is part of the suspension of disbelief between a fictional work and an audience, an invisible barrier between realities.

"Breaking the fourth wall" in general refers when a character is showing his/her awareness of the audience, ignoring the barrier between realities to directly interact with them. Generally this is done for comedic effect. The level of fourth wall breaking varies between characters and writers, with some merely having knowledge from our reality that a fictional character wouldn't/couldn't know (referring to Tobey Maguire as Spider-Man) through to attempting to influence the story by pleas to the writer and/or artist (like Deadpool trying to kill the creators of a comic he appeared in by travelling to their dimension).

Deadpool is the most famous character in the Marvel universe to have broken this wall frequently over and over again. He can even see his own yellow speech balloons.