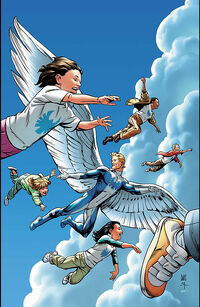 The Flight is ability to lift off the ground, to ride air currents or to fly self-propelled through the air. This ability is attained through different means.

The capabilities of flight, including characteristic modifications while flying, min and max speed, maneuverability, and basically control over the ability.

For example, it is known from NYPD's costume division member Danny Granville's knowledge that only 9% of the individuals granted with the power of flight who can use it.[1]

Notable Users of all kinds of Flight

For a complete list of characters who can fly, see this category.