Gamma mutates[1] are usually the result of exposure of gamma radiation to individuals who possess the "gamma gene" ("apparently the factor that caused superhuman mutation with gamma exposure")[1] which allows them to convert gamma radiation into a mutagenic change. In some cases, the change is permanent. In others, the change can occur when desired or under stimuli. The mutation is usually indicated by green coloration.

The Gamma mutates are not to be confused with the Gamma mutants, a level of power among the X-Gened mutants.

Variations in the mutations

These factors contributed to the extremely non-human appearance of the Abomination, the Neanderthal-like appearance of the Hulk, and the relatively normal appearance of Doc Samson, whose only aberration is his hair color. Why gamma radiation tends to produce mutate forms of a greenish hue is not yet known.[citation needed]

As is apparent by comparing the mutated forms of such gamma radiation subjects as the Hulk, the Abomination, She-Hulk, Doc Samson, and the Leader, different frequencies of gamma radiation affect different human beings in different ways. The effect that intensive gamma radiation has on most people is cellular deterioration and eventual death, but there are others whose genetic constitution enables them to mutate so as to gain superhuman powers.[citation needed]

The subject's potential for mutation is dictated by certain mysterious "interstitial" segments of DNA (deoxyribonucleic acid),[citation needed] the molecules which carry a living organism's genetic code. Under the action of mutagenic influences, such as gamma rays, the segments can trigger many body wide restructuring events.

As for the subject's psychological make-up, it has been theorized that the gamma radiation somehow acts to mold the subject's mutated form according to repressed desires within his subconscious. Hence, Doc Samson's mutated form is the physical embodiment of his own long-buried desire to become a super heroic figure.[citation needed]

As similar theories speculated for Inhumans' Terrigenesis[2] and Mutants,[3] the Gamma Mutates' "physical transformation is allegedly affected by each mutate's subconscious".[1]

The One Below All

It was later discovered that gamma radiation itself had a mystery element, of a state described by Brian Banner as being neither a wave or a particle. This element turned out to be energy or power produced by the One Below All.[4] Brian went on to state to Bruce, in the Below-Place, that this third form of Gamma energy was a divine emanation produced by the One Below All and was essentially like magic in that it could affect and alter reality regardless of the laws of science and nature.[5] Puck speculated that in this state, altered by the One Below All, is when gamma energy is able to create "metaphor people" and is the primary reason why gamma mutates can be drastically different with abilities influenced by their conscious and unconscious minds.[6] All gamma mutates possess a Green Door within them that acts as a portal to the Below Place and a gate that the One Below All can reach through to increase its influence over events in the multiverse.[4] 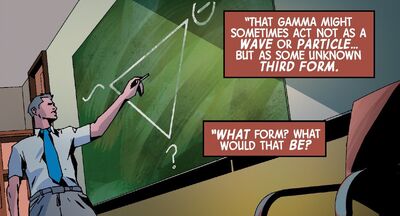 Gamma radiation refers to the highest known frequency wavelength of electromagnetic radiation, which can manifest scientifically as both a wave and a particle,[1] and a mutagenic third form that is supernatural in nature.[2] In large doses, gamma radiation is lethal to most living beings, but individuals affected by the third form are instead transformed into beings called Gamma Mutates. During the experimental detonation of a Gamma Bomb, scientist Dr. Bruce Banner was hit with the blast, absorbing massive amounts of gamma radiation. The radiation enhanced his body so whenever he became enraged, he changed into the Hulk.[3] Many different gamma mutates have been created ever since, like the Abomination, She-Hulk, the Leader, Red Hulk, and Sasquatch, to name a few.

The mystical third form of Gamma radiation originates from a malevolent deity called the One Below All, who is trapped in the Below-Place--a dimension situated in the lowest layer of reality, below the deepest layer of Hell. Whenever they die, a gamma mutate's soul will be plunged into the Below-Place until, eventually, a Green Door leading them back to the land of the living opens, and the return to life without memory of their stay in the Below-Place.[4]

Bruce Banner experimented with gamma radiation in hopes of making soldiers immune to radiation poisoning, as per his agreement with Thaddeus Ross, and accidentally turned himself into the Hulk in the process.[5]

The Tesseract is mentioned to emit small amounts of gamma radiation, leading to the recruitment of Bruce Banner to assist in finding it. When Tony Stark and Banner discuss their relative "handicaps", Stark cites that the Hulk saved Banner's life, because any other human would have died absorbing that much gamma radiation.[6]

Gamma radiation is one of the components of the Centipede Serum, an item designated to give a person superhuman abilities. The rest of the components are the Extremis virus, a variation of the Super Soldier Serum and technology from the Chitauri for injection.[7]

Having to do with the genes, the section of a cell of a living being that contains the molecule DNA (deoxyribonucleic acid), which controls the transmission of hereditary characteristics from parent to offspring.

The study of the process of heredity of physical characteristics in living organisms. 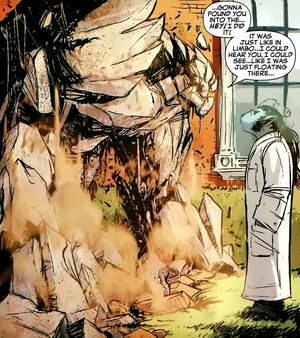 Terrakinesis, also known as Geokinesis, is the ability to mentally manipulate the earth.

The user can create, shape and manipulate earth and "earthen" elements including most solid objects, specifically all minerals and mineral compositions regardless of their state (mountain, boulder, sand or dust), dirt, soil, etc.

For a list of characters who can control the mineral components of the earth, see Category:Geokinesis.

A certain humanoid being native to the Asgardian realm of Jotunheim, Olympus, and possibly other extradimensional worlds as well.

A humanoid being with a longer lifespan and greater physical powers than human beings, whose kinsmen or self has once been worshipped by humanity. Some races of gods, such as the Olympians, are for all practical purposes, immortal. All races of gods now dwell on some extra dimensional world, although they may have lived on Earth in ancient times. There seems to be a special connection between the gods who were once worshipped on Earth and Earth itself.

The Godpower particle is a theory originally formulated by Dr. Rachna Koul, a specialist in the field of imperiumology (the science of superpowers). She asserted that superhumans are "each connected to one or more interdimensional sources of energy". The particle allows a powered being to deal with the conservation of energy.[1]

Doctor Doom discovered the particle during his own research and decided to call it the "Von Doom Particle".[2]

The Golden Age of Comic Books was a period in the history of American comic books, generally thought as lasting from 1938 until the mid-1950s during which comic books enjoyed a surge of popularity, the archetype of the superhero was created and defined, and many of the most famous superheroes debuted.

Comic-book fans and historians widely agree that the Golden Age began no later than 1938 with the debut of Superman in Action Comics #1, published by DC Comics. Superman, the first comic book superhero, was so popular that superheroes soon dominated the pages of comic books. Between early 1939 and late 1941, Timely Comics, the 1940s predecessor of Marvel Comics, had million-selling titles that featured the Human Torch, the Sub-Mariner, and Captain America.

The grandfather paradox is a paradox of time travel, first conceived by the science fiction writer René Barjavel in his 1943 book "Le Voyageur Imprudent" ("The Imprudent Traveller"). The paradox, stated in the second person, is this: Suppose you traveled back in time and killed your biological grandfather before he met your grandmother. As a result, one of your parents (and by extension, you) would never have been conceived, so you could not have traveled back in time after all. In that case, your grandfather would still be alive and you would have been conceived, allowing you to travel back in time and kill your grandfather, and so on. According to this theory you would be stuck in an endless time-loop from which there would be no possible escape. You would, however, never know of this loop.

An equivalent paradox is known (in philosophy) as autoinfanticide — that is, going back in time and killing oneself as a baby.

The grandfather paradox has been used to argue that backwards time travel must be impossible. However, other resolutions have also been advanced.

There could be "an ensemble of parallel universes" such that when you travel back in time and kill your grandfather, you do so in a parallel universe in which you will never be conceived as a result. However, your existence is not erased from your original universe.

In the Marvel Universe, any change made to the timeline results in an alternate timeline. Some characters know this and use it to their advantage (such as Vance Astro of the Guardians of the Galaxy, whose timeline shift allowed an alternate self to become Justice.)

A graphic novel (GN) is a long-form work in the comics form, usually with lengthy and complex storylines, and often aimed at mature audiences. In contrast to the familiar comic magazines, a graphic novel is typically bound using materials of more durable qualities, using a light card stock for softcover bindings or a heavier card for the hardback editions, enclosed in a dust jacket. Graphic novels generally are sold in bookstores and comic book shops, rather than on comic books' original point of sale, newsstands. The term can also encompass a short story collection, or collected issues of previously published comic books republished in a single large volume.

Comic works created and published as a single narrative, without prior appearance in magazines, comic books or newspapers, are called original graphic novels (OGN).

The evolving term "graphic novel" is not strictly defined, and is sometimes used, controversially, to imply subjective distinctions in artistic quality between graphic novels and other kinds of comics. It suggests a story that has a beginning, middle and end, as opposed to an ongoing series with continuing characters; one that is outside the genres commonly associated with comic books, and that deals with more mature themes. It is sometimes applied to works that fit this description even though they are serialized in traditional comic book format. The term is commonly used to disassociate works from the juvenile or humorous connotations of the terms "comics" and "comic book", implying that the work is more serious, mature, or literary than traditional comics. Following this reasoning, the French term "Bande Dessinée" is occasionally applied, by art historians and others schooled in fine arts, to dissociate comic books in the fine-art tradition from those of popular entertainment, even though in the French language the term has no such connotation and applies equally to all kinds of comic strips and books.

In the publishing trade, the term is sometimes extended to material that would not be considered a novel if produced in another medium. Collections of comic books that do not form a continuous story, anthologies or collections of loosely related pieces, and even non-fiction are stocked by libraries and bookstores as "graphic novels" (similar to the manner in which dramatic stories are included in "comic" books).

Whether manga, which has had a much longer history of both novel-like publishing and production of comics for adult audiences, should be included in the term is not always agreed upon. Likewise, in continental Europe, both original book-length stories such as La rivolta dei racchi (1967) by Guido Buzzeli, and collections of comic strips have been commonly published in hardcover volumes, often called "albums", since the end of the 19th century. 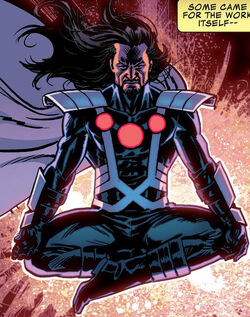 A theoretical particle that mediates the force of Gravity. Individuals such as Graviton or users of Gravitonium can manipulate them as well.

Retrieved from "https://marvel.fandom.com/wiki/Glossary:G?oldid=5809661"
Community content is available under CC-BY-SA unless otherwise noted.