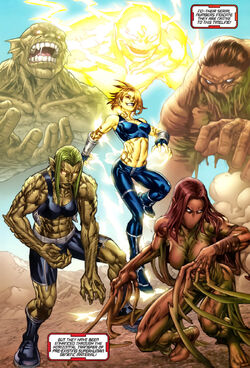 Gamma mutates[1] are usually the result of exposure of gamma radiation to individuals who possess the "gamma gene" ("apparently the factor that caused superhuman mutation with gamma exposure")[1] which allows them to convert gamma radiation into a mutagenic change. In some cases, the change is permanent. In others, the change can occur when desired or under stimuli. The mutation is usually indicated by green coloration.

The Gamma mutates are not to be confused with the Gamma mutants, a level of power among the X-Gened mutants.

Variations in the mutations

These factors contributed to the extremely non-human appearance of the Abomination, the Neanderthal-like appearance of the Hulk, and the relatively normal appearance of Doc Samson, whose only aberration is his hair color. Why gamma radiation tends to produce mutate forms of a greenish hue is not yet known.[citation needed]

As is apparent by comparing the mutated forms of such gamma radiation subjects as the Hulk, the Abomination, She-Hulk, Doc Samson, and the Leader, different frequencies of gamma radiation affect different human beings in different ways. The effect that intensive gamma radiation has on most people is cellular deterioration and eventual death, but there are others whose genetic constitution enables them to mutate so as to gain superhuman powers.[citation needed]

The subject's potential for mutation is dictated by certain mysterious "interstitial" segments of DNA (deoxyribonucleic acid),[citation needed] the molecules which carry a living organism's genetic code. Under the action of mutagenic influences, such as gamma rays, the segments can trigger many body wide restructuring events.

As for the subject's psychological make-up, it has been theorized that the gamma radiation somehow acts to mold the subject's mutated form according to repressed desires within his subconscious. Hence, Doc Samson's mutated form is the physical embodiment of his own long-buried desire to become a super heroic figure.[citation needed]

As similar theories speculated for Inhumans' Terrigenesis[2] and Mutants,[3] the Gamma Mutates' "physical transformation is allegedly affected by each mutate's subconscious".[1]

The One Below All

It was later discovered that gamma radiation itself had a mystery element, of a state described by Brian Banner as being neither a wave or a particle. This element turned out to be energy or power produced by the One Below All.[4] Brian went on to state to Bruce, in the Below-Place, that this third form of Gamma energy was a divine emanation produced by the One Below All and was essentially like magic in that it could affect and alter reality regardless of the laws of science and nature.[5] Puck speculated that in this state, altered by the One Below All, is when gamma energy is able to create "metaphor people" and is the primary reason why gamma mutates can be drastically different with abilities influenced by their conscious and unconscious minds.[6] All gamma mutates possess a Green Door within them that acts as a portal to the Below Place and a gate that the One Below All can reach through to increase its influence over events in the Multiverse.[4]