View source
In accordance with the naming conventions, it has been suggested that this page be moved to:
Human Spiders (Homo arachnus) (Discuss).
Please do not move this page yet, as the correct name could still be in discussion and may change again soon. A robot will make the necessary page moves once any discussions are resolved. 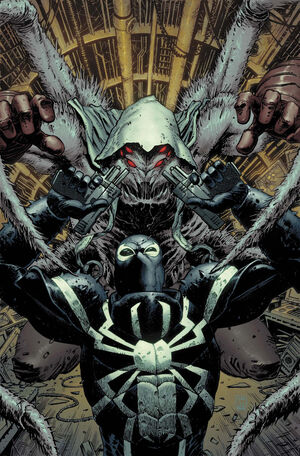 Homo arachnus (Latin: "Human Spider") is a grouping of mutates created by the Spider-Virus. They are controlled by the Spider-Queen, and connected to the Web of Life and Destiny.[1] Those turned into Homo arachnus are bestowed with powers identical to those possessed by Spider-Man after his first encounter with the Queen, before metamorphosing into giant spiders or humanoid spider-monsters. The metamorphosed individuals are under the control of the Queen, who is able to control them in the same manner as those with the Insect Gene, and can control the transformation's progression at will.

After his mutation into a spider-like creature, the Life Foundation member, Carlton Drake, took on the name "Homo Arachnis".[2]


(See Also: Man-Spider, The Other)