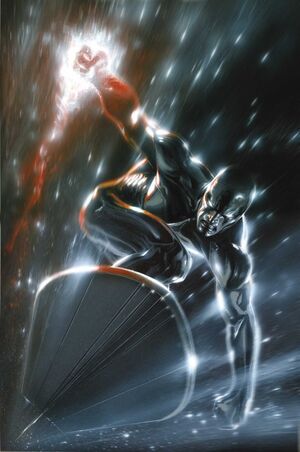 A dimension accessible from Earth whose physical laws differ from the Earth's in the following ways. Firstly, it is possible to surpass the speed of light within hyperspace, so that it does not violate special relativity in conventional space. Secondly, hyperspace is "warped" in comparison to Earth's dimension so that the distance between two points in the hyperspace might be immensely shorter than the distance between the equivalent points in Earth's dimension. Interstellar travel is impractical for any sentient race that has not discovered the means of traveling through hyperspace in order to reach a destination in their own dimension. However, it is possible for whoever manipulates the Power Cosmic, or employs specific unorthodox means such as Mjolnir, to enter the hyperspace after achieving faster than light speeds,[1][2][3] or accelerate and surpass the speed of light without even accessing the hyperspace.[4] (Silver Surfer was deprived from his space-time travelling powers, presumably including his capacity to enter hyperspace[5]). Hyperspace is also known as sub-space (which is sometimes confused with the Negative Zone) and warp-space. It is accessible through naturally occurring or artificially created nexuses in space called space warps; a tangible way to identify it. Hyperspace is also the source of the four fundamental forces of the universe.