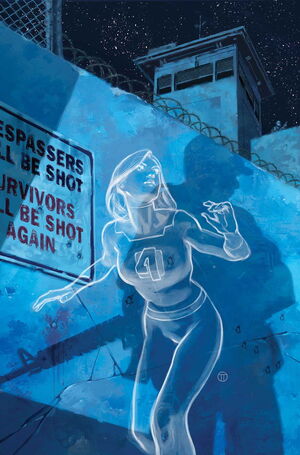 Invisibility is the state of an object which cannot be seen. An object in this state is said to be invisible (literally, "not visible"). The term is usually used as a fantasy/science fiction term, where objects are literally made unseeable by magical or technological means. However, its effects can also be seen in the real world, particularly in physics and perceptional psychology.

Since objects can be seen by light in the visible spectrum from a source reflecting off their surfaces and hitting the viewer's eye, the most natural form of invisibility (whether real or fictional) is an object which does not reflect nor absorbs light (that is, it allows light to pass through it). In nature, this is known as transparency, and is seen in many naturally-occurring materials (although no naturally-occurring material is 100% transparent).

Visibility also depends on the eyes of the observer and/or the instruments used. Thus an object can be classified as "invisible to" a person, animal, instrument, etc. In the research of sensorial perception invisibility has been shown to happen in cycles.

For a list of characters who can turn invisible, see Category:Invisibility