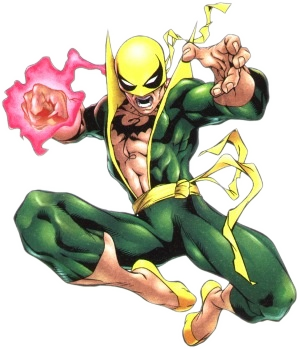 The Iron Fist is the greatest source of Chi energy on the planet. Shou-Lao was an immortal dragon who became the source of this power. During a performance of the dragon riders of K'un-Lun for the entertainment of its Yu-Ti, Shou-Lao went berserk and attacked the city's leader. He was slain by Quan-St'ar, who cut out the dragon's heart. Enraged at this, Yu-Ti banished Quan-St'ar from the city and revived the dragon by melting its heart and placing it in a sacred cavern. From this moment, each Iron Fist had to accomplish the final test of defeating this dragon in order to absorb part of its power. He was reborn over 66 times.[1] Danny Rand defeated the dragon, and in the course of the battle had the dragon-shaped tattoo burned on his chest. After defeating Shou-Lao, he plunged his hands into the brazier containing the dragon's immortal heart, and it charged him with the power of the Iron Fist.[2][3]

By summoning his chi and focusing it into his hand, he can draw upon the superhuman energy derived from the heart of the mystic serpent Shou-Lao and make his fist inhumanly powerful and super humanly resistant to injury and pain on a superhuman scale. This "iron fist" technique does not involve a physical transformation of any kind, simply a psychic channeling of concentrated natural energy. With his fist in this state, Rand can shatter wood and brick, rip through steel, and punch his opponents with extraordinary concussive force without sustaining injury to himself. The force of this technique has rendered incredibly durable Super humans such as the Colossus unconscious.[4]