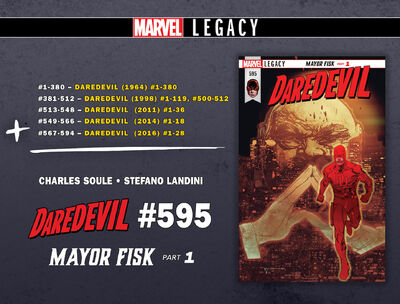 Legacy numberings were first used in 2001, a few years after the relaunch of many titles due to Heroes Return. The legacy numbering was presented as a secondary element in the trade dress of a comic's cover, featured under the series' main issue numbering. This practise was phased out by 2004. In some instances, a series would return to its legacy number for a landmark issue. For example, Amazing Spider-Man (Vol. 2) #58 corresponded to #499, so the series resumed its legacy numbering for the next issue, Amazing Spider-Man #500. Legacy numberings were abandoned in 2013 with the line-wide relaunch of Marvel NOW!, and were briefly reintroduced as the main numbering of most series for Marvel Legacy. Series were relaunched en masse afterward for Fresh Start, but legacy numberings returned to being featured as a series' secondary numbering, appearing once again under the series' main issue numbering, with the added prefix "LGY."

The psychic, psionic or magical ability to screen the physical body from the effects of gravity and thus rise off the ground. The ability to fly.

(Press) The act of picking up a given amount of weight from the ground and hoisting it at arm's length above the head. This is the standard term used to estimate relative strength levels in the "Marvel Universe."

Lightforce is the name given to a force of energy that is the counterpart to the Darkforce, its opposite in every way. While the Darkforce is corruptive, Lightforce energy is cleansing, being derived from life force and capable of purging toxins, drugs, and other malignant substances, as well as curing diseases, mental instability, and criminal inhibitions.[1] It can also be used offensively, as seen with Tandy Bowen's signature light daggers.

Lightforce users affected by Mister Negative's corruptive touch - derived from the Darkforce - will become Darkforce users themselves, and vice versa.[3]

True Limbo is a dimension that is unique in that it exists outside the timestream and thus possesses no time. Reality in Limbo is comprised of a single, ever-changing moment in which everything that ever was, is, and could be coexist. Human beings within Limbo might imagine that time passes there, since they are conditioned to think in such a way, but they cannot age or die there. In order to time travel without aging, it is necessary to pass through Limbo.

The limited series has a single specific story to tell. They follow the standard plot set up of beginning, middle and resolution. Usually, all plot points are covered by the end of the series. There have been limited series done in an anthology format but there have been only a few of these produced.

Limited series are often done by a single creative team but in cases where there are changes, it is usually the writer who remains constant throughout the run while the artist may change hands. The number of issues is usually determined by the writer’s plotting and also by editorial mandate.

The genesis of the limited series may be traced to anthology series and back up stories in series featuring the title character. Publishers would often experiment with new characters and stories. If proven popular, these characters were quickly spun off to their own titles. This was particular of comics during the 1960s and through the 1970s which saw a boom in sales of comics. This was often done despite uncertainty whether a character or team could carry on a series more than a few issues.

Nowhere is this more seen than in DC Comics which continuously released a slew of titles between 1975 and 1978, reaching close to 60 monthly ongoing titles. Eventually, DC was forced to scale back and cancel more than one half of its titles (see the so-called DC Implosion). Aside from suffering financially, DC Comics was also criticized for straining itself creatively and editorially, affecting the quality of their comics.

After recovering from the implosion of its titles, DC Comics decided to experiment with a new format to tell stories. The result was the 1979 World of Krypton miniseries, as DC Comics calls such short run works. The new format allowed them to tell stories that may not fit in to an ongoing series and to showcase characters into a short story without the risk and obligations of an ongoing monthly. It also freed creators to tell a longer story without the confines characteristic of a backup story.

With the success of the miniseries format, DC Comics followed by experimenting with longer stories and concepts that are outside of their universe of superheroes. First began in 1982, Camelot 3000 was the first limited series to run to twelve issues and be dubbed as a maxiseries.[2] It was printed on Baxter paper stock and sold through direct market stores. DC Comics followed it with another important contribution to the concept with a new book format. Ronin was printed on glossy paper stock and introduced the Prestige Format. The Prestige Format (or bookshelf format as called by other publishers) is packaged within a cardstock cover and square bound with more pages than the conventional magazine pamphlet and no advertisements. [3] Without the advertisements, it resulted in a different pacing in comic storytelling. The Prestige Format is not favored by other publishers and DC Comics is the only one that almost exclusively continues to use it.[citation needed]

It did not take long for other publishers to follow the limited series form. Marvel Comics used it to feature popular characters from team titles and put them in a lengthy solo adventure. Wolverine's earliest solo adventures were told in limited series. Crossovers between two characters or teams presented as major storylines were also in limited series form before the concept of crossover stories jumping from one title to another was conceived. Contest of Champions brought forth the idea of a major event affecting the Marvel Universe, this would be taken further with the twelve-issue Secret Wars saga in 1984 and by DC Comics’ Crisis on Infinite Earths in 1985.[citation needed]

Majority of Dark Horse’s comics are released in limited series form. Their contribution would be the idea of a series of limited series. Each limited series told a complete story to be followed by another one that builds its story from the previous one. This provided an avenue for creator-owned works where the uncertainty of investing the creator’s property in an ongoing series is lifted from the creator’s concern. The owning creator could complete a limited series installment and follow it with another when they can. This is a model other publishers would use.[citation needed]

Since then, the limited series made it possible for creators to tell graphic novel length stories. Releasing the story in monthly installments enabled them to immediately receive returns on investment. Further returns are possible with trade paperback collections of the series.[citation needed]

Four to six issues is still the norm for most limited series and presents as the most reasonable investment for comic publishers though there are series that run for as short as two or three issues. Twelve-issue maxiseries form was popular in the 1980s. Many memorable series ran in this length such as Secret Wars, Crisis on Infinite Earths, Watchmen, and Squadron Supreme. This form almost faded out in the 1990s. One point that went against it was the greater financial risk in investing in a lengthy limited series. The popularity of the maxiseries length was resurrected by DC Comics with the success of Batman: The Long Halloween and followed by The Kents.[citation needed]

Stories of greater length, those running to more than twelve chapters, were often done in multi-title crossovers, though the 1995 Marvel Comics event, Age of Apocalypse, involved several limited series that replaced the ongoing X-Men related titles for four months and bookended by two one-shot specials. This idea is revisited by Grant Morrison in 2005 with the Seven Soldiers of Victory project and which he dubbed as a “mega-series”. [4] Marking the difference between the two, Age of Apocalypse was produced by several writers while Seven Soldiers is the most ambitious undertaking so far by a single writer.[citation needed]

As a rule, the number of issues a limited series will run is determined from the outset. However, there are cases where this rule is changed. Two reasons stands for this, one is often commercial while the second is, to a rarer extent, creative. Dark Horse’s 1993 Aliens: Colonial Marines was originally to have a run of twelve issues. When the sales of Colonial Marines faltered midway through the run, the series was shortened to ten issues. Marvel’s Big Town Vol 1 was set to run six issues only to be set back to four issues. Number changing does not always result in reduction of issues. The first Gen¹³ was to run four issues with the fourth a double-sized finale. Instead, the final issue was split to two in order to meet publishing schedule. Brian Michael Bendis found difficulty in resolving the finale of Ultimate Six and Marvel granted his request of extending the series from six to seven issues.[citation needed] 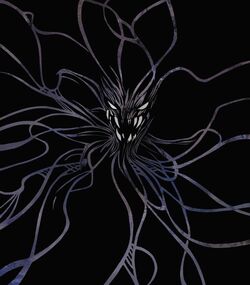 Living abyss, also known as antilife, anti-life,[1][2] black ichor,[3] and "Necro-Power",[4] is an eldritch substance originating from the primordial void that existed before and between the iterations of the Multiverse, ostensibly as an opposite reaction to the creation of life and Light by the Celestials;[5][6] and as such it is connected to Oblivion, an ancient cosmic entity embodying the primordial void itself.[7][8]

Living abyss is typically amorphous and black or red in coloration;[5][1] and is often described as cold to the touch,[9][10] with a noxious decaying smell.[1][6] As it purportedly originated to corrupt and destroy the Light and life itself, creatures formed from living abyss are capable of killing gods and feeding off their power.[11][12][13] Living abyss possesses parasitic, corruptive properties; with there seemingly being no limit to what living abyss is able to infect, as even inorganic objects like planets and the very universe itself can be infested.[6][14]

Compatible hosts are often transformed into predatory monsters or corrupted versions of themselves.[15][6] Gods, cosmic entities, and other supernatural beings are the most-compatible with living abyss contamination, while mortals are often consumed by the infestation and killed outright.[16][17] Exceptions exist, as Gorr and Øde were granted godlike powers by bonding to the primordial symbiote All-Black and the Røkkva respectively;[18][19] and through experimenting with the living abyss the dark god Knull was able to create a species of parasites that could infest gods and mortals alike, amassing an army of predatory monsters with which to conquer the universe.[5]

Entities created from or infected by the living abyss typically possess the ability to shapeshift - often manifesting fanged jaws, claws, and tendrils.[1] Superpowered beings infected by the living abyss possess augmented, often-corrupted versions of their innate powers -- bonding to the All-Black symbiote and being infested by the Røkkva turned King Thor of Earth-14412 and Thor Odinson of Earth-616's lightning black and amplified its destructive capabilities,[20][6] while bonding to an otherwise mundane symbiote greatly augmented Spider-Man's powers.[21] This same symbiote -- later called Venom -- imprinted most of Spider-Man's powers into itself, and bestowed its subsequent hosts -- many of whom were ordinary humans -- those augmented abilities.[22]

Living abyss resonates with Darkforce energy and can be affected by Lightforce energy - as demonstrated by Cloak being adversely affected during the second Symbiote Invasion and Martin Li's Lightforce-imbued touch mutating trace remnants of the Venom symbiote inside Eddie Brock's body into the Anti-Venom symbiote.[23][24]