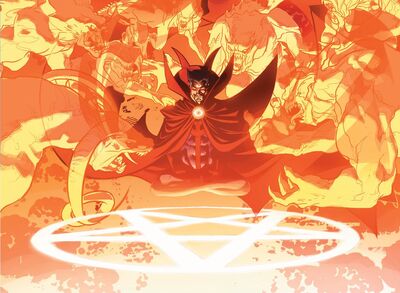 Magic is the practice of utilizing certain universal energies and extra-dimensional forces whose nature is beyond the scope of the technologically-oriented science of all known sentient races. Using spells and phrases it is often used to simulate other powers, such as reality warping, mind control, and elemental attacks. As of Ultimates 2 #100 it has been explained that magic exists as a result of the Fifth Cosmos, the fifth version of Eternity that presided over the fifth version of the multiverse. It was The Fifth that wove magic into the fabric of reality which would then be carried over into future versions of the Multiverse.[citation needed] According to Agatha Harkness, magic can exist on any planet where there is life.[1]

Extradimensional Energy - powers gained through the tapping of extra-dimensional energy and by invoking entities or objects of power existing in mystical dimensions, with different physical and magical laws, tangential to our own. Unlike the first two, the entities invoked generally have a say in how or if the power is used.

Magnetism manipulation or Ferrokinesis is the ability to control and/or generate magnetic fields.

For a more complete list of characters who can control magnetism and articles related to this topic, see Magnetokinesis

Malibu Comics was a comic book publishing company in the 1990s. Marvel bought the company and transferred all of its characters (mostly from the Ultraverse) to the Marvel Multiverse.

A set of dystopian cyberpunk alternate future universes, usually as takes on the original, containing such heroes as Ravage 2099, Spider-Man 2099, Punisher 2099 and many others. 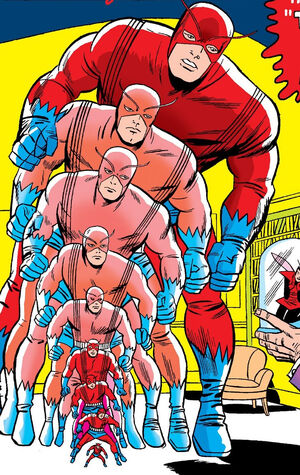 The process by which an organism who decreases in size and weight extends bodily mass extra-dimensionally.

In accordance with the naming conventions, it has been suggested that this page be moved to:
Marvel Alterniverse (Discuss).
Please do not move this page yet, as the correct name could still be in discussion and may change again soon. A robot will make the necessary page moves once any discussions are resolved.

Marvel Alterniverse began as an imprint of Marvel Comics designed to encompass all imaginary, alternate-world, What If...?, and similar stories published by Marvel Comics. Though the imprint is now defunct, it supposedly continues as a "lab" of Marvel Comics experimenting in new ideas.

Following an inter-office shake-up in 1994, Tom DeFalco was removed as Editor-in-Chief of Marvel Comics. Rather than name a successor, Marvel instead appointed five "Editors-in-chief," each of whom woud oversee a certain number of titles and, by extension, a certain portion of the Marvel Universe. This change was reflected externally by collecting all Marvel monthlies into broad groups: the X-Men titles, the Spider-Man titles, and three new imprints. Bob Harras continued to oversee the X-Men titles, Mark Gruenwald helmed the new Marvel Heroes Imprint imprint, Bob Budiansky helmed the Spider-Man titles, Bobbie Chase took over the new Marvel Edge imprint, and Carl Potts oversaw the Licensed Books and Marvel Alterniverse imprint.

(aka MDP) This very site! Our goal, to create the largest online database of information on the Marvel Comics Universe. Inspired by the Official Handbook of the Marvel Universe.

Marvel Digital Comics are comic books that you can enjoy on Marvel.com that you can either view with a payed-for membership that can be purchased online or on a giftcard you can find at some stores.

Marvel Next is an initiative that was launched by Marvel Comics in early 2005. It was designed to spotlight several unrelated titles that feature young protagonists. Like the Tsunami imprint before it, it aims to attract young readers. Marvel Next titles carry a "Marvel Next" tag on the cover, but not in the place imprint names generally carry their logos.

The titles are set in the Marvel Universe and most of them (Araña: The Heart of the Spider, Young Avengers, Runaways, and Amazing Fantasy Vol 2) all have connections to pre-existing titles (taking advantage of settings, characters and events from previous stories).

Crossover There has been little or no crossover between the various comics. However, the Young Avengers and the Runaways have been mentioned in one another's comics.

Thus far, the closest thing to a crossover has centered on the fictional drug MGH. It has appeared in numerous Marvel titles over the past few years, but recently appeared in a two-part Young Avengers story in Autumn 2005. The following month, the Runaways were asked to fight the Pusher Man, an MGH dealer.

Gravity has appeared in Marvel Team-Up, alongside other new heroes such as Araña and X-23, and Excelsior member Darkhawk.

In a press conference, Joe Quesada announced that, as part of the Marvel Civil War event, a miniseries called Civil War: Young Avengers and Runaways would be published.

A being who can physically change shape and appearance, in whole or in part. If the transformation requires the addition or subtraction of mass, the mass accruing or mass shunting process is involved. Also called polymorph.

A merged reality is a unique and new reality that is created by the merging of two pre-existing realities. A merger of two realities can be caused by many different sources, typically on a cosmic scale. The cause of the merger could be due to the work of cosmic beings, temporal anomalies, as well as the result of technological or mystical means, be they intentional or accidental. Depending on the conditions a merger can cause the separate realities involve to cease to exist, while other similar realities endure, as a divergence is created between the merged and unmerged versions of those realities. Similarly a merged reality can be separate again, yet continue to endure independently of the realities that were merged to bring it into existence. A merged reality can create a situation where two individuals are merged into an amalgam, or the collective populations of both realities exist on the same world without any physical beings being merged together. A merger can also affect the timeline of this new reality, sometimes creating a new history that is an amalgamation of the two merged realities. Sometimes a merger begins a new historical track having no past prior to the merger.

A parallel universe that can be reached from the Earth dimension by compressing one's own mass to a certain point, thereby forcing it through an artificially created nexus into the other universe. Microverses were once erroneously believed to exist within atoms.

A world existing within parallel universe known as Microverse. Micro-worlds were once erroneously believed to exist on subatomic particles.

Mind control often appears as the means whereby a person literally seizes control of the minds of the victims to the point where not only their bodies come under direct control, but also their consciousnesses as well, so that they become puppets or slaves to the controller. Fiction often depicts this process taking place electronically; the trademark equipment of the supervillains Ringmaster and Controller are examples of this. In addition, characters with powerful telepathic or psychic abilities, like Professor X and Phoenix of the X-Men, can do the same with mental concentration against a target.

What is commonly referred to the "Modern Age," "Modern Era" or "Age of Heroes" refers to the period of time following the birth of the Fantastic Four in Fantastic Four #1 to the present time. Since the Marvel Universe operates in a sliding timescale, this period no longer starts in 1961 when Fantastic Four #1 released in real-life. All events from that issue onwards and into the present are compressed in a window of time of roughly 13 years, per 2008's Official Handbook of the Marvel Universe A to Z #2. This means that, at any time in the present, the spaceflight that gave birth to the Fantastic Four always happened roughly thirteen years prior. In 2008, that would be around 1995. In 2012, it happened around 1999. In 2022, circa 2009. And so on. And based on that, all events in between are adjusted accordingly. This sliding timescale only affects events that only happen in the comics, the date of historical events are unmoving (for instance, 9/11 will always have happened in 2001). Depictions and mentions of these historical events or historical figures are regarded as topical references.

In accordance with the naming conventions, it has been suggested that this page be moved to:
Montesi Formula (Discuss).
Please do not move this page yet, as the correct name could still be in discussion and may change again soon. A robot will make the necessary page moves once any discussions are resolved.

A spell contained in the Darkhold capable of destroying all vampires utterly.[1] The downside to using the spell is that the effect is temporary. Once the spell is broken, the Vampires it destroyed are rejuvenated.

The spell was discovered by a monk named Montesi but predates humanity by millennia. The incantation is "Nosmo cobis...holo erasma rabis...katerama lucem..."[1]

Something capable of making cellular-level changes in a living organism.

Mutants, or Homo superior, are beings who were born with physical characteristic(s) not possessed by either of their parents.

In many cases in the Marvel Universe, this characteristic is the X-Gene, which when triggered, gives the being access to abilities not normally available to their race. 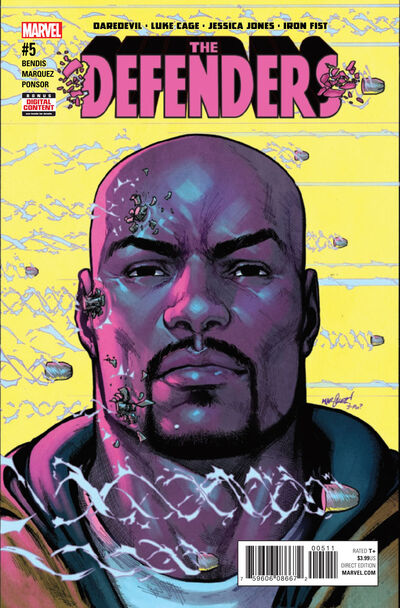 The process or result of a cellular-level change in a living organism. A good mutation is one that benefits the organism in some way, such as the acquisition of a spare heart, Increased cerebral capacity, or a superhuman ability. A bad mutation is one that impairs the organism in some way, such as a deformity. Many special traits or powers are the result of a body-wide series of good mutations, not just the mutation of single cell.