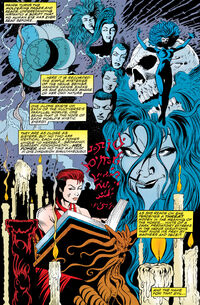 Nexus Beings are rare individual entities with the ability to affect probability and thus the future, thereby altering the flow of the Universal Time Stream. These beings, each referred to as a nexus, act as the keystones of the Multiverse and are crucial to its ultimate coherence and stability.[1] Nexus Beings are vigilantly watched over by cosmic forces such as the Time Variance Authority and the Time-Keepers to be aware of any temporal changes that the nexi may cause to the Time Stream and act accordingly.

One nexus being alone supposedly exists on each of the parallel worlds of the Multiverse, personifies the character of their respective realm, and serves as the focal point or anchor of that reality.[2] Each being also acts as the node of mystic energy for the their respective world. The physics of the dimensional universe also dictate that no two nexus beings can exist on the same plane of reality, and can only project onto other realms with an active nexus being as an apparition.[2]

Nexus Beings also have the potential to produce unbelievably powerful offspring, as it was mentioned that any born of the Scarlet Witch, Nexus Being of Reality 616, would be powerful enough to stand among the Great Forces of their Universe and rock the cosmos itself.[3]

Each Nexus Being supposedly has a power unique to themselves (e.g. Geomancy, Sorcery, Psychometry, Necromancy, Hex Power, etc.) despite all having the potential to change probability.[2]