View source
In accordance with the naming conventions, it has been suggested that this page be moved to:
Originators (Earth-616) (Discuss).
Please do not move this page yet, as the correct name could still be in discussion and may change again soon. A robot will make the necessary page moves once any discussions are resolved. 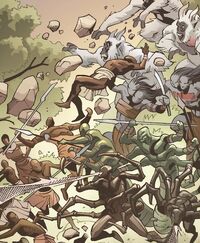 The Originators are a denomination for a group of several species that existed before man in what would one day become Wakanda. When men immigrated to the Originators' land, they initially co-existed peacefully, but war broke out when men started abusing the resources of the area. The Originators routed the humans, but as a result, the Gods of Wakanda came to existence from the heroes of the people. The Gods of Wakanda and their human followers then fought back and banished the Originators to the Nether-Realms,[1] where they remained until they were freed by Sefako the Adversary.[2]