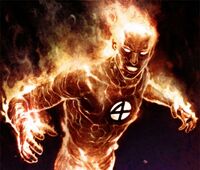 Pyrokinesis is the ability to excite the atoms within an object, with possibly enough energy to ignite the object. A pyrokinetic is a person capable of generating flames from thin air, not requiring the consumption of oxygen or combustible objects to maintain the flames. They have been seen being able to increase the temperature in their proximity, create flames, and endure extreme heat and flame without being harmed.

For a full list of characters who can control fire, see here.