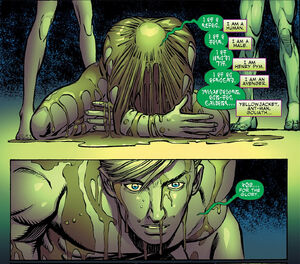 The Skrull Infiltration Ritual was a mixture of science and magic that imbued the Skrull with the powers and memories of the selected subject from multiple templates, effectively turning those who underwent the rite of passage into a Super Skrull.[1]

This allowed the Skrull subject to go undetected in human form by Iron Man's technological scans, Charles Xavier's mental scans, Spider-Man's Spider-Sense, Wolverine's animal senses, or any other conceivable forms of detection. So subtle and powerful is this form of concealment neither Doctor Strange can detect the Skrull with the Spell of Tartashi, nor could the Elder God-powered Scarlet Witch using Xavier's psychic powers delve past the memory blocks.[2]

Among the ways to get through the cloaking were the prophetic powers of the Olympian goddess Urania.[3]

It also trapped H'rpra in Mephisto's Realm believing herself to be Mockingbird.[4]