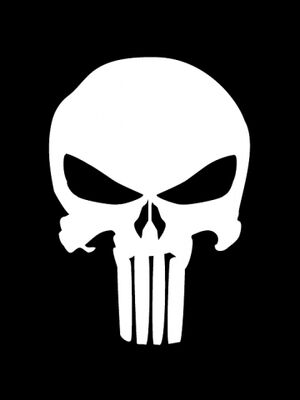 The Skull Symbol is worn by the Punisher on on his chest. The reason he wore the symbol can vary.[1]

The Hell Lord Olivier would later imply that the symbol was at least partly inspired by his own skull-like face,[2] a notion supported by Khonshu referring to the skull on the Punisher's chest as "his lord's banner".[3]

The "teeth" of the skull occasionally double as detachable weapons or pieces of equipment, such as clubs, nunchaku, canisters, firearm cartridges and magazines, and explosives. The symbol's association with the Punisher has also led to it being used to intimidate criminals, with Castle at one point bluntly stating it "terrifies them".[4]

Frank Castle was serving his second tour of duty in the Vietnam War as a sniper. He was asked to hunt down a Vietcong sniper known as "The Monkey". A VC sniper who wore a monkey’s skull around his neck for good luck. Castle ended up being captured, but during his escape he tied a dead VC soldier to a tree and painted a white skull on his chest as a message to "The Monkey". He painted one on his own chest. He ended up killing "The Monkey" in a sniper duel in the jungle.[6]

Retrieved from "https://marvel.fandom.com/wiki/Glossary:Skull_Symbol?oldid=4621099"
Community content is available under CC-BY-SA unless otherwise noted.