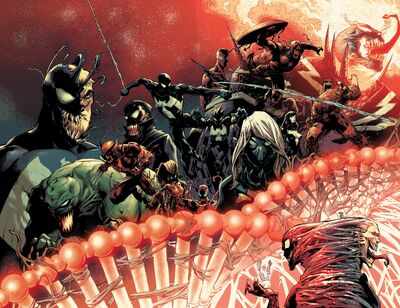 Symbiote Codices refer to both the trace amounts of living abyss left in the bodies of symbiote hosts,[1] with the greatest concentrations being found in the hosts' spinal cords;[2] and to the metaphysical records of the personalities, memories, and any unique powers those hosts possessed stored within the Symbiote Hive-Mind.[3] Absorbing an extracted physical codex enables a symbiote to temporarily channel the Hive-Mind's metaphysical codex, granting the symbiote access to any powers they possessed and sometimes letting the recorded codex's consciousness take control of the symbiote itself.[1][4][3] It was theorized by the Maker that if a symbiote that has been disconnected from the Hive-Mind absorbs enough codices, its connection will be restored;[1] though the only symbiote this is shown to have worked for was the Dark Carnage symbiote - which already possessed a lingering connection to the symbiote god Knull due to being an offshoot of the Grendel symbiote-dragon, which Knull had created and remote-piloted.[5][6]

While it generally takes forty-eight hours for a symbiote to fully bond to a host,[7] anyone who fully or partially bonds to a symbiote for any length of time is left with a codex.[8] Supernatural entities like demons can also be imbued with symbiote codices, and can transfer them into people who've never bonded to symbiotes themselves - for example, Alejandra Jones received a codex from her Spirit of Vengeance,[4] from when both it and the Venom symbiote had bonded to the Red Hulk.[9]

The consciousnesses of hosts are preserved within the Symbiote Hive-Mind as codices, effectively making it an afterlife for deceased hosts. Hosts who have been bonded for lengthy periods of time are able to move freely through the Hive Mind, and can even subtly influence the world around them by manipulating ambient living abyss. The Hive-Mind also doubles as an afterlife for deceased symbiotes, with the Tyrannosaurus symbiote being reunited with Rex Strickland after its death,[10] and Cletus Kasady being reunited with the Carnage symbiote after his death.[11] Should a metaphysical codex come into contact with a symbiote that still exists in the world of the living, they can merge with it to become incarnated through it,[3] and they can also temporarily indwell symbiotes should their physical codex be consumed;[3] as seen when Flash Thompson's codex temporarily assumed control of the Venom symbiote.[1] Additionally, hosts who possess uncommonly strong bonds to their symbiotes can imprint their codex into that symbiote, letting them survive even after the death of their physical bodies. For example, Rex Strickland's codex piloted the Tyrannosaurus symbiote after his death,[12][10] Cletus Kasady's codex piloted the reborn Carnage symbiote following his death,[13] Emperor N'Jadaka's codex piloted his symbiote following his death,[14] and Gorr's codex piloted the All-Black symbiote even millions of years after his death.[15]

Codices can also affect the behavior and abilities of their hosts in various ways:

Additionally, exposure to certain stimuli can cause codices to reconstitute themselves into fully-fledged symbiotes or pseudo-symbiotes, which under some circumstances has enabled deceased symbiotes to be resurrected:

Artificial symbiotes like Earth-1610's Venom and Carnage symbiotes, Earth-65's Venom symbiote, Earth-12041's symbiotes, and the Venom Virus do not leave codices in their hosts; though they can be amalgamated with codices or living abyss to augment them.[31][32]