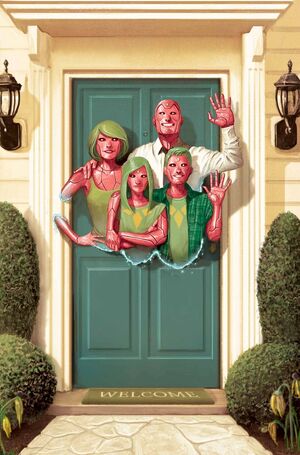 Synthozoid,[1] or Synthezoid, is a term originally conied by Dr. Hank Pym[2] to indicate a special type of android, also known as a "synthetic humanoid" robot. They are empowered by synthesizing solar energy and are replicas of the human body, containing analogues to virtually all human organs, brain, blood, and tissue, composed of a synthetic organic-like substance, Horton Cells. This substance mimics all the functions of human tissue, but is several times as strong, durable and resilient.

In the 1930s, Dr. Phineas Horton developed a material he dubbed as the Horton Cells, with the ability to replicate the functions of human cells, and used them create a synthetic man. However, his creation reacted to oxygen during its presentation during the 1939 World's Fair, and burst into flames. As the synthetic man was deemed a failure, Horton was forced to bury it in concrete. However, the synthetic man escaped, and became the first Human Torch, aka Jim Hammond, which is regarded as the wold's first fully functional android.[3]

James Bradley, who was involved in the original project but did not receive any credit for it, later created his own Synthezoid; Volton, eventually fighting against the Invaders as a member of the Battle-Axis.[4]

Eventually, Horton created another Synthezoid, named Adam II, who turned against his creator and attempted to build an army of synthezoids like him to destroy humanity.[5]

During World War II, a Nazi scientist created his own army of synthezoids, the Firebrand Squadron, based on Horton's stolen designs, and used them to battle the Invaders.[6]

Baron Zemo also created his own army of Inhuman Torches, by capturing the Human Torch and dissecting him to copy his artificial DNA. The Invaders were attacked by them, but they were aided by the time travelling Thunderbolts, who trapped the synthezoids under a snowfall and tore them apart.[7]

Nazi scientist Dr. Sigmund Fell escaped to Bolivia after the war and sought to create a secret society androids, known as New Berlin. Due to the flaw that the synthezoids would burst into flames when exposed to aire, the androids were confined to a sealed city with specially treated air to prevent the combustion. The androids themselves believed to live in the actual Berlin, where Nazis won the war and ruled the world. Fell recruited the Mad Thinker to help with the creation of the “Inhuman Torch”, and was ultimately revealed he ignored he was an android too.[8]

The Soviet Union attempted to create its own version of a Synthezoid.[9] The main scientist behind the project was radically transformed by the alien technology he was working with, and became a new entity of synthetic matter, who decided to no longer answer to his previous identity, becoming Vostok.[10]

Ultron created his own synthezoid using a temportal duplicate of the Human Torch as template, modifying the cells to stop the reaction with oxygen, and also making them able to alter their density. He named his creation "Vision".[2]

Alkhema created the Bio-Synthezoids using a "Plastoid Birthmatrix" in Al-Luxor, Egypt, dubbing the place Robotopia. Given that she was following Ultron's programming to build them as his new army, their first action was to rebuild Ultron. The Avengers destroyed that facility but one of the Bio-Synthezoids, Antigone, escaped with Ultron's head, remaining hidden until the Avengers left.[11]

Vision later created a "Synthezoid Family" in hopes to humanize himself. He started with a wife named Virginia and then combined their brainwaves to create their twin children; Vin and Viv.[12] He later even created a canine Synthezoid named Sparky as a pet for the family.[13]

The United States Government attempted to recreate Dr. Horton's work and developed their own Synthezoid, dubbing it a "Eve-series synthetic humanoid". Deriving it from the original Human Torch. She was code named Invader-1; but preferred to be known as Tara. She was placed on the newly-formed team of New Invaders, and due to her lack of control she was given a special containment chamber when not on a mission.[14]

The High Evolutionary created his own Synthezoid on Counter-Earth named Eve, modeled after the Vision.[15]

Weapon Plus developed Project Descendant to create replicas of the original Human Torch. Three scientists, known just as Father, Mother and Brother, resorted to magic and used the Orb of Necromancy to animate their best twenty failed androids as functional synthezoid "High-Breeds", potentially the first of a new android species.

The trio fell to arguing about what to do with them, and the synthezoids ended up being released into the wild. Father eventually created an underground city of robotic intelligences, in order to lure the descendants of the High-Breeds.[16]

The Atlas Foundation created their own Synthezoid combined with the technology of the M-Series robots, naming it M-41 Zu, to fight Sindr during the War of the Realms.[17]