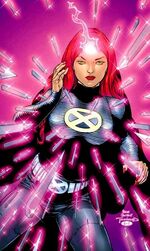 Telekinesis (often called Teke[1] or TK,[citation needed] much less known as Psychokinesis)[citation needed] is the psionic ability to move, manipulate and control a multitude of people and objects with the mind without physically touching them,[2] especially over long distances. Depending on the user's skill and power, they may be able to levitate themselves and other objects (including heavy objects), and form powerful pushes/blasts and protective shields.

The beings able to perform telekinesis are named Telekinetics[3][4][5][6] or Telekines.[7]

A common use for telekinesis is immobilizing an opponent telekinetically, thus preventing any physical attacks while freely attacking his/her opponent with many objects he or she telekinetically controls and manipulates at great speeds.[citation needed]

This is an effective move in combat however it should be noted that characters with sufficient physical strength can break free of this control, as they can generate more physical force than the psychokinetic force that the telekinesis user generates (For example: If character A can exert 15 tons of psychokinetic force and another character can exert 50 tons of physical force with his/her superhuman strength, character A cannot immobilize the other character).[citation needed]

This is the reason why certain characters with telekinesis cannot immobilize opponents with vastly superior physical strength, such as the Hulk or Thor. However, if an opponent such as Jean Grey possessed more than enough telekinetic strength and force, she might be able to telekinetically immobilize such powerhouses. Cosmic beings usually have the strongest and most powerfully advanced telekinesis and resisting their control is almost impossible for anyone except the physically strongest characters, and even then, it would usually take a lot of effort to resist them.There have been some tremendous feats of psychokinetic power by gods and cosmic beings such as Odin flinging a target across a dimension, Galactus moving large objects across galaxies, and The White Phoenix Of The Crown manipulating every atom in The Marvel Universe while she was in the White Hot Room.[citation needed]

It seems some telekinesis users can "sense" the features of objects they have great telekinetic manipulation and control over, since X-Man and Rachel Summers can detect electrons in an object even though they don't have microscopic vision to allow them to see subatomic particles. Cable and Rachel can also understand how things work by simply taking an object apart (this is called intuitive aptitude).Furthermore Jean Grey was able to rebuild Emma Frost's entire body without having more than a rudimentary knowledge on anatomy and physiology.[8]

Many types of telekinetic abilities often take more exotic and specific forms, allowing their wielders to specialize in fantastic feats. Rearranging the quantum structure of matter, controlling fire, and bending light are examples of these abilities. Many telekinetics are unable to manifest the full strength and magnitude of their abilities beyond their specialty. Some may even have a telekinetic aura of a certain color.[citation needed]

Forms and Types of Telekinesis

Throughout the history of metahumans, mutants and superhumans, several creative offensive and defensive ways have been discovered to utilize this incredibly strong physic/psionic ability:

Allegedly and according to Kimura, telekinetics are overconfident.[3]