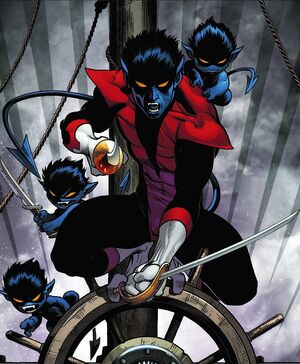 Teleportation is the movement of objects or elementary particles from one place to another, more or less instantaneously, without traveling through space. Teleportation in the Marvel Universe is accomplished by a variety of means. One common method is to open a direct portal or wormhole in space and walk through it, appearing at the desired location. Another method is to bodily shift through a wormhole to another dimension with different physical laws, and then shift back out at the new location.

Magic users are able to open portals anywhere in spacetime, other dimensions, and the rest of the Multiverse. This is done depending on their level of skill and what Spells and Phrases they are using.[10] The Masters of the Mystic Arts utilize a magical device known as a Sling Ring.[11]

Mjolnir: when Thor rapidly swirls Mjolnir he can channel energies for the purpose of Wormholes through means of a vortex.[12]