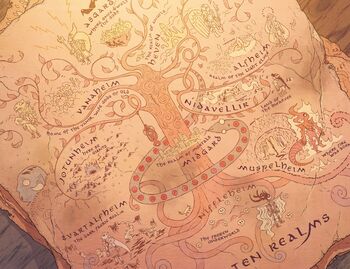 The Ten Realms of Asgardian cosmology are the separate worlds of that dimension supported by Yggdrasill, the World Tree. Although the realms are commonly divided into ten, further subdivisions can be made (i.e. Valhalla is a distinct portion of Asgard). Thanks to the Allspeak, all Asgardians and related races can communicate in all of the languages of the Ten Realms, Earth's dialects, and various alien languages.[1]

Of the Ten Realms, four -- Asgard, Alfheim, Nidavellir, and Vanaheim -- are part of the same dimension, located on different regions of the same continent.[2] According to Dr. Eric Solvang, each of the purported Nine Worlds is its own universe and there may actually be an infinite number of them;[3] a theory that All-Father Odin himself later partially confirmed.[4]

Travel between realms is done via various portals and dimensional rifts. The Asgardians travel via Bifrost, the rainbow bridge that is guarded by Heimdall.[5]