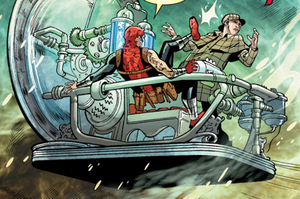 Time travel is the process of leaving the timestream at a given point, traversing through the timeless realm of Limbo for a timeless interval, and re-entering timestream at another point, not having physically aged in transit. Since there are alternate futures, it is not always possible to travel to the same one. Since traveling into the past always affects reality in at least a minute way, one can never physically travel to one's true past, which is by definition the past in its original state, uncomplicated by extra temporal factors.

Limbo is a dimension that is unique in that it exists outside the timestream and thus possesses no time. Reality in Limbo is comprised of a single, ever-changing moment in which everything that ever was, is, and could be coexist. Human beings within Limbo might imagine that time passes there, since they are conditioned to think in such a way, but they cannot age or die there.

There are three possible methods of time travel in the Marvel Universe: a. Time travel machines. b. Magic. c. Personally generated energy. All methods involve generating "chronal displacement inertia" freeing one's chronological position in the timestream (just as escape velocity frees one from Earth's gravitation), skimming through the extra-temporal realm outside the timestream (Limbo), and re-entering the timestream at another chronological position. Because no time exists outside the timestream, the perceived duration of the passage through limbo may be anything from non-existent to an eternity.

The Marvel Universe is part of a multiverse (a system of related universes) which diverge from one another at critical junctures. Without using a Doomlock or similar device, the act of time travel using technology almost always produces a critical juncture diverging a new alternate timeline or world at the moment one enters the reality of another time period, past or future of the time period set out from. It creates one timeline where an extratemporal person or element materialized via time travel, and one "virgin" timeline where that person or element did not.

If one travels a second time to an era one has already been to, one will not materialize on the "virgin" timeline nor the timeline diverged by one's previous trip, but a third timeline diverged from one or the other. A time traveler can never travel back to the exact same timeline more than once. Again, since the second and third divergent timelines are identical until the time traveler's arrival, they will be indistinguishable at first.

The co-existence of multiple counterparts of the same being on one timeline does not cause time paradoxes. Time paradoxes are only possible in single timeline universes. Altering an incident in the past will indeed affect the future reality of the timeline diverged by the time traveler's presence. One can create any number of different divergences by one's significant actions, the act of time travel being but the first. Whether one will be able to return to the present of the timeline where one did no reality-tampering divergences or one which diverged as a consequence of one's past actions is a function of the means of time travel.

Returning to one's present also creates a divergent reality. If one has been gone any length of time, one may find differences have accumulated in accordance with the length of time one was away. Selective alterations in the present as a consequence of the time traveler's actions in the past do not occur. An alteration in the past will create an entirely new timeline with events proceeding smoothly from the point of divergence. To the denizens of that timeline's "present", the past is a continuous series of events that always happened as they happened. Were one to see selective dematerializations, they would either be caused by something other than the act of time travel unto itself or would be hallucinations.