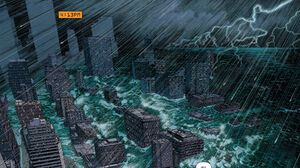 In Earth-1610 continuity, the Ultimatum Wave is the name attributed to a Doomsday weapon created by Magneto that caused a giant tidal wave to strike New York, killing thousands of people. This incident sparked the "Ultimatum" event.

A universe is a single dimension that contains a virtually infinite amount of space.[1] The dimension where the planet Earth exists and shares space with other celestial bodies is a universe,[2] and can be simply called the "Earth universe"[3] or Earthspace.[4] Other examples of universes include the Dark Dimension[3] and the Astral Plane.[5]

It should be noted that all spatially-infinite dimensions are technically speaking an alternate/parallel universe to a given Earthspace. However, the term of "alternate universe" and "parallel universe" are reserved to the infinite variants of any given universe with an Earth that also possess an Earth.[3] Because of this, the term "universe" itself is often used interchangeably with reality, a reality being a collection of dimensions that includes an Earthspace.