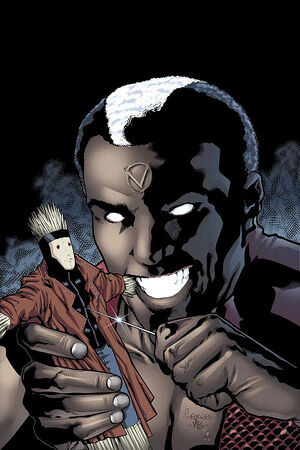 A religion worshiping deities called the Loa, and a system of mystical practices ultimately derived from the Loa. The term 'Voodoo' is derived either from the Loa's alternate name, "Vodu", or from a 12th century French sect called "Vaudois".[1]

Some of the most well known practitioners of this magic are Marie Laveau, The Voodoo Queen, and Jericho Drumm better known as Doctor Voodoo.[2]

Simon Garth was resurrected by a Voodoo cult turning him into a Zombie. They called upon Damballah of the Vodū, the serpent god, and with the aid of matching talismans, resurrected the corpse of her former employer as a mindless zombie. One of the two amulets was placed around Garth's neck; the other was given to Gyps. Using the amulet, Gyps could control the Zombie.[3]

Retrieved from "https://marvel.fandom.com/wiki/Glossary:Voodoo?oldid=5601997"
Community content is available under CC-BY-SA unless otherwise noted.