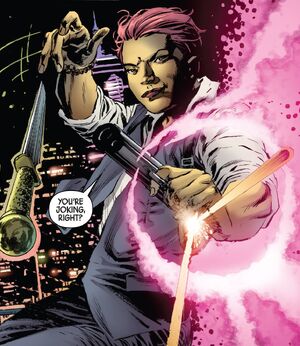 Witchcraft is a system of Magic that is practiced and utilized by all witches. This type of Magic originated and come from the Goddess of Witchcraft, a magical Abstract Entity. However, It has been proven that if the Goddess who acts as a source of this power dies then witchcraft will be gone forever, therefore making its practitioners powerless.[1]

According to the Scarlet Witch, witchcraft is far from chaotic and its intensity as well as power are connected to the energy of earth and womankind.[2]

Sorcerers who use this kind of Magic are usually the one who got their power at birth, which means they are born with witchcraft and have the ability to control it.[2] Also, it is shown that Witchcraft can be passed down from generation to generation. For example, Natalya Maximoff, the Scarlet Witch before Wanda and her mother, inherited her magic from her father, the Scarlet Warlock, and later passed it on to her daughter Wanda.[3] At least one other practitioner, The Wu, also inherited her magical affinity from her mother.[4]