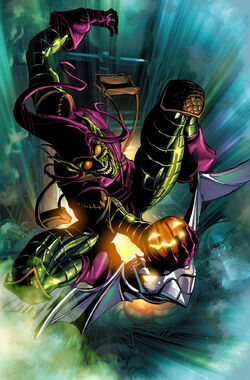 It looks like the armor is doing its job then. It's supposed to make you uncomfortable. The Osborns chose the goblin crest in order to strike fear into the hearts of their enemies on the battlefield.

The Goblin Armor was an experimental suit created by Norman Osborn. It was originally manufactured at Oscorp as a battlesuit for the military but was retrofitted with a Goblin motif to match Osborn specifications. The Green Goblin's costume incorporated chain mail in the tunic, giving him further protection from high impacts, such as the punches or kicks inflicted during his battles with Spider-Man.[citation needed]

Developed by Norman Osborn, it was stolen from the Goblin Workshop by Phil Urich, who used it to become the new Hobgoblin.[1] The Goblin Mask causes a chemical reaction with the Goblin formula, giving Phil superhuman strength and durability while wearing it. It is equipped with flight-capable wings that eliminate the need for a Goblin Glider and a flaming sword. During one of his fights with Spider-Man, he left his armor on a rooftop to escape the hero.[2] Norman presented the villain with a different version of the armor when he joined the Goblin Nation as the Goblin Knight.[3] Daniel Kingsely theorized that Norman built the armor in preparation for a comeback as the Green Goblin, and stole the design of the wings from the Vulture.[1]

Like this? Let us know!
Retrieved from "https://marvel.fandom.com/wiki/Goblin_Armor?oldid=6444178"
Community content is available under CC-BY-SA unless otherwise noted.