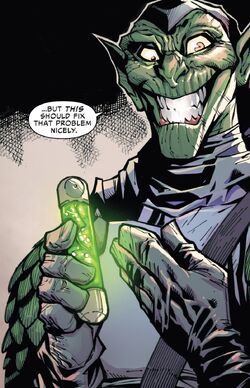 The Goblin formula, additionally known as the OZ formula/serum is a biogenic chemical compound created by Oscorp made to augment the human body, similar to the Super-Soldier Serum. It was developed by Dr. Mendel Stromm and his assistant Dr. Nels van Adder. However, Dr. van Adder used the serum on himself turning him into a "Goblin" like creature. He was killed when he attacked a group of Oscorp security.[1]

After Norman Osborn had his business partner, Dr. Stromm, arrested for embezzlement, he found in his notes a formula which could apparently augment a person’s body to superhuman levels. Norman began research on the formula, hoping to eventually sell it.[2] Unknown to him, his son Harry had tampered with it to spite him. Consequentially,[3] the completed formula was unstable and exploded in Norman's face. He spent the next week in the hospital recovering. After finally regaining consciousness, he found his mental and physical functions have been greatly enhanced. It was later learned that exposure also causes severe insanity which was the primary motivation for Norman taking the identity of the Green Goblin.[2]

After learning that Peter was Spider-Man, Harry Osborn exposed himself to the Goblin Formula and donned his father's suit and proclaimed himself the new Green Goblin. The effects of the formula caused memory loss and when he was defeated, he could not remember what he was doing.[4] When he regained all his memories, Harry submerged himself in a new version of the formula that his father had been working on before the elder Osborn's disappearance,[5][6] making himself stronger than Norman believed possible.[7] It was enough for Harry to match Spider-Man blow for blow.[6] However, this version hadn't been tested previously;[7] as a result, it appeared to have poisoned Harry, when it merely restored him.[6][8]

Roderick Kingsley came into possession of the Goblin Formula. He knew of the dangers and tested it first on Lefty Donovan, who was a small-time hood. He sent Donovan out as a decoy Hobgoblin and, satisfied, terminated him before the thug could expose his employer's identity.[9] Kingsley then used a modified version of the Goblin Formula. He tried to find a safer way to expose himself to the chemicals and used a robot to mix the concoction into a giant vat. He then passed through a permeable membrane limiting the amount of exposure to the chemicals. However Kingsley stayed in the membrane for a bit longer than he had hoped but came out unharmed. After exposing himself to the formula, he set out as the true Hobgoblin once more.[10]

On a journalism assignment, Phil Urich joined his uncle Ben Urich in an investigation of Oscorp Tower. When his uncle was besieged by attackers in the building, Phil hid and tried to find help. Stumbling upon an experimental new Green Goblin costume Phil also fell into a chamber of the Goblin Formula. Quickly dressing up in the suit, he scared off the hoods. Later on, he decided that the costume and equipment were worth using.[11]

Lily Hollister found a hidden door in Harry Osborn's closet and found an old journal of his. She uncovered the location of one of Norman Osborn's secret rooms in the journal. When she had first gone in, she found all of the Goblin's equipment along with some experiments. After accidentally knocking over some experimental Goblin chemicals, she absorbed them into her skin, and was now able to transform into her "Menace" form at will.[12]

Stanley Osborn was born with enhanced abilities due to his genetic heritage from his parents Harry Osborn and Lily Hollister who have both taken the Goblin Formula in their lifetime.[13]

The "Goblin King" sprayed Carlie Cooper's face with the Goblin Formula, transforming her into a Goblin, and nicknamed her "Monster." Carlie seemingly succumbed to the madness induced by the formula but refused to reveal Spider Man's identity to the Goblin King.[14] She was mostly reverted to human form by Spider-Man's cure, but retained black eyes and a few scales.

When Norman Osborn bonded to the Carnage symbiote, he mixed the formula with the symbiote, purging its traditional weaknesses of sonic and fire and granting it new powers such as pyrokinesis and enhanced strength. This new combination resulted in them becoming Red Goblin.[15]

When Norman as Red Goblin went after his family, he abducted his grandson, Normie Osborn and bonded him with symbiote filled with the formula, turning Normie into a miniature version of Red Goblin. Eventually, Normie turned on his grandfather and his parents were able to get most of the symbiote from Normie's body.[16]

During Goblin Nation's takeover of New York City, Parker Industries managed to create a cure for the formula and its resultant madness.[17]

Like this? Let us know!
Retrieved from "https://marvel.fandom.com/wiki/Goblin_Formula?oldid=6511353"
Community content is available under CC-BY-SA unless otherwise noted.