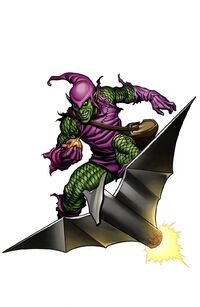 After the flying broomstick, Green Goblin then soon re-designed this device into an improved version that he called his "goblin glider", capable of great maneuverability and speeds of up to 90 miles per hour. It was capable of supporting about 400 lbs including Norman's weight (and far more for very brief periods of time). Top speed and a full normal load would exhaust the fuel supply in about one hour. The main microprocessor assisted manual controls were behind the head of the glider, and later modifications added voice-activated radio-linked controls integrated into the Green Goblin's mask. The goblin glider was steered primarily, however, by the weight and attitude of its rider. The Green Goblin's boots locked into the stirrups of the glider electromagnetically. When his Green Goblin memories returned, Norman Osborn found the glider in one of his old safe houses, and for Spider-Man in full costume.[1] After a brief battle across the city, the Goblin escaped on his glider, believing Spider-Man dead.[2]

During their next fight, Spider-Man wrapped his legs tightly around the Goblin's neck, steering the Goblin's glider to the hospital where Harry was lying in a bed: realizing his son's condition caused the Green Goblin to return to his Norman Osborn identity and pass out.[3] Green Goblin (Norman Osborn) used the glider to kidnap Gwen Stacy and take her on top of the George Washington Bridge,[4] where she died.

After destroying the building in Brooklyn used as his hideout, Hobgoblin escaped on his glider, carrying with him his protege Adam Wright.[5] The glider was later destroyed by Ghost Rider when he was confronted by the Hobgoblin.[6]

Green Goblin (Harry Osborn) used the glider to kidnap Mary Jane Watson and take her on top of the George Washington Bridge,[7] where they only talked.

An unused Goblin Glider was later found by Spider-Man in the abandoned Osborn Industries building.[8]

A modified Glider used by the Hobgoblin, designed to look like a bat.

Through his resources at Horizon Labs, Spider-Man had created his own version of the Goblin Glider for faster travel across New York City. He used it during his recent fight against Equinox.[9]

The Punisher Glider was a Goblin Glider acquired by the Punisher and outfitted with government-issue drone missiles.[10]

After being augmented by the Carnage symbiote as the Red Goblin, Norman Osborn became capable of manifesting a fiery symbiote-augmented Goblin Glider out of his body, and coating an existing Goblin Glider in symbiote biomass to transform it.[11]

Demogoblin could form a similar glider from Hellfire, with additional powers.[12]

Retrieved from "https://marvel.fandom.com/wiki/Goblin_Glider?oldid=5815801"
Community content is available under CC-BY-SA unless otherwise noted.