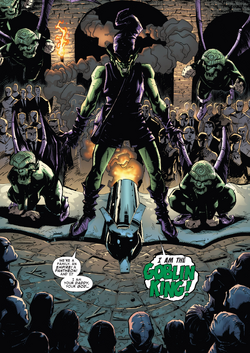 I know his every weakness. All the ways to draw him out. Go, my Goblin Nation. You have your targets. Let the Spider know, until I see his little webbed head again, No one is safe.

The Goblin Nation is a group of organized crime composed of Goblin-themed villains led by the Goblin King against their arch-nemesis Spider-Man.[1] Many of those rescued by Osborn were those who were driven into hiding by Spider-Man's increasingly brutal tactics, starting with the fall of the area of Hell's Kitchen known as "Shadowland". They were able to do this via a protocol unknowingly into Spider-Man's cameras called the "Goblin Protocol", which "hid" anyone bearing a Goblin mask or a marking of a Goblin mask from the cameras.

The Nation finally struck during Spidey's lowest point - alienating himself from other heroes by his own ego, Otto could only watch as the Goblins made their first attack on his home base the Raft, renamed "Spider-Island II", destroying it and killing his Spiderlings before proceeding to run rampant across New York City. Having learned the truth behind Spider-Man's change in persona, the Nation set things up so that everything connected to Octavius was destroyed, leading the villain to finally break down and admit that Peter was the real hero, not him.

The Nation was quickly dismantled when Peter Parker reclaimed his body and rallied Miguel O'Hara and the Avengers into taking back the streets, leading to a final fight with the Green Goblin, in which the madman was finally defeated.[2]

Following that events, Urich, now the new self appointed Goblin King, take the lead of the Goblin Nation remnants, which became one of the main organized crime powers in New York. He called upon two other crime powers, Mister Negative's criminal empire and the Maggia fraction lead by the Eel, to divide the criminal underground. While Urich and Negative were waiting for the Eel, they were surprised to see him crashing into the place from a window. They were confronted by the Black Cat, who wanted the Eel's part. Negative refused, as he claimed Hardy only had reputation, which was destroyed by the Spider. She claimed that all of them had been outed by him, but that she will be successful in what they failed, to defeat him.[3]

Over the next eight months, the Goblin Nation would start taking in orphans, runaways and other at-risk children. With time, they built an undeground castle as their base and became more like a lifestyle than a mere gang, with plans to expand to the surface. The Nation still founded itself with crime and became rivals to the Black Cat's gang.[4]

Like this? Let us know!
Retrieved from "https://marvel.fandom.com/wiki/Goblin_Nation_(Earth-616)?oldid=5930018"
Community content is available under CC-BY-SA unless otherwise noted.