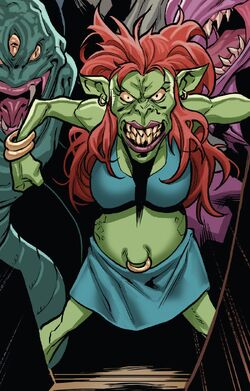 The Goblins are a kind of creatures of Ten Realms.

"Goblins" were presented as an archetype among the species of the Ten Realms, along with "Elves", "Gods", "Angels", "Men" and "Giants", and like all those, they originated from Ginnungagap, the great unending nothingness, the yawning void.[1]

It is unclear if each kind of Goblins is related to another.

For more information on the Goblins of Muspelheim, please consult the Fire Demons page.

Malekith has Goblin Mages at his disposal, whom he once used to brew a potion of blood binding between himself and Roxxon CEO Dario Agger.[3]

The Cat Elves of Alfheim mentioned the presence of goblins within their territory.[4]

Other goblins have been witnessed in undisclosed locations within the Ten Realms:

Like this? Let us know!
Retrieved from "https://marvel.fandom.com/wiki/Goblins_(Asgard)?oldid=5356688"
Community content is available under CC-BY-SA unless otherwise noted.