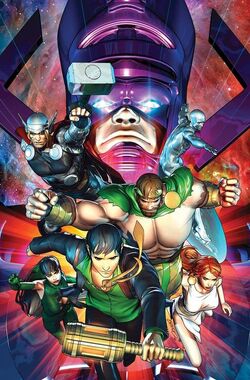 The God Squad was assembled by the Council of Godheads, at the behest of Athena, in order to fight against the Skrull Pantheon. Though most of the members are scattered or destroyed at the final confrontation, Hercules, Amadeus Cho, and Snowbird survive to return to Earth, having fulfilled their mission of crushing the alien deities, while Amatsu-Mikaboshi rules over the alien gods, free of the seal of the Kami at last.

"Godmobile", a wooden ship donated by the Australian gods

Retrieved from "https://marvel.fandom.com/wiki/God_Squad_(Earth-616)?oldid=5547221"
Community content is available under CC-BY-SA unless otherwise noted.