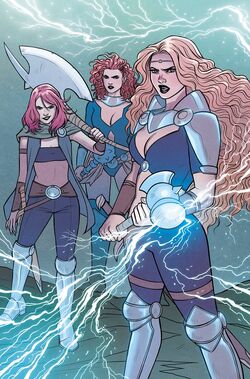 The Goddesses of Thunder are Thor's granddaughters from the future. They helped him defeat the God Butcher[2] and, later, a future version of Galactus.[3]

After Thor sacrificed himself to restore the universe, the Goddesses of Thunder went on to become members of a new team of Avengers consisting of themselves, an apparent Gamma mutate, and a Phoenix Force-powered Wolverine.[4]

Like this? Let us know!
Retrieved from "https://marvel.fandom.com/wiki/Goddesses_of_Thunder_(Earth-14412)?oldid=6371485"
Community content is available under CC-BY-SA unless otherwise noted.