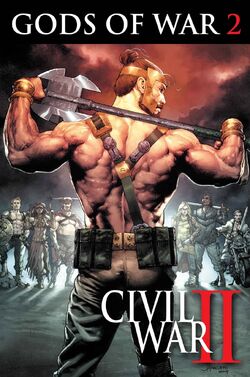 Hercules called his gods and demigods friends from around the globe to join the team that he was putting back together; the Gods of War, with hopes of stopping the new gods known as the The Uprising Storm. The team included Sigurd, Lorelei, Theseus, Beowulf and his already allies Ire, Gilgamesh and Tiresias. But before the meeting could end the Uprising Storm attacked. Beowulf battled Catastrophobia but was no match for the new god. Theseus gloated after shooting Catastrophobia with a rifle believing he saved Wulfie's life, but the new god just stood back up.[1]

After failing to defeat them in previous battle, Hercules and the Gods of War decided to attack the Uprising Storm in their hideout. Thanks to the combine magic of Lorelei and Ire they managed to weakened the New Gods’ powers and after a fierce battle they were successful in destroying them forever.[2]

Many gods were proposed but didn't joined the Gods of War:

Retrieved from "https://marvel.fandom.com/wiki/Gods_of_War_(Earth-616)?oldid=5547229"
Community content is available under CC-BY-SA unless otherwise noted.